I love seeing people knit in public, especially on transit. I have been known to knit in bars and cafés, but I generally use my transit time for reading because I’m almost never able to get a seat. (That being said, I once brought my knitting with me because I knew I’d finish my book and found I loved knitting on the subway.) 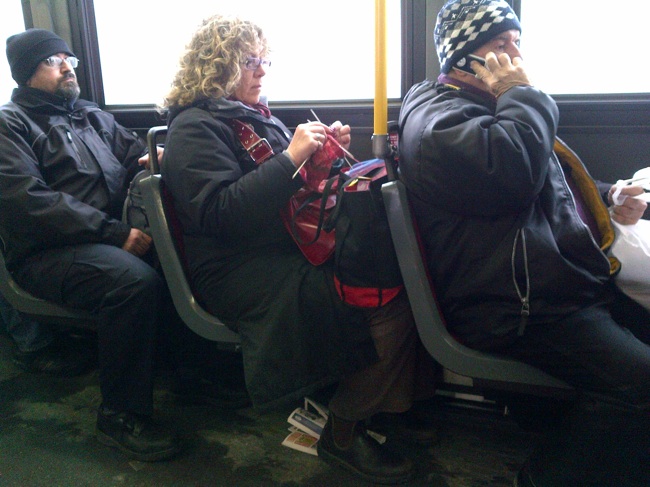 Anyhow. The other day I was on a bus and and this woman (above) was knitting a lovely pink sock across the aisle from me, so I sneakily took her photo (do you know her?). I realized, while I was watching her, that I rarely get to just sit and observe someone else knitting – it’s kind of mesmerizing. L watches me knit all the time (even if we’re supposed to be watching a movie or something), but he’s an engineer, so perhaps he’s interested in it as a method of construction or something. Naively, I assumed that watching someone knit would be most interesting if you weren’t a knitter; how wrong I was.

For example, this woman was knitting in the continental style (that is, throwing the yarn with her left hand). This looked like magic to me, an English knitter, and I found myself unable to tear my eyes away as I tried to figure out just how it all worked. She made it all look so easy, but when I tried it at home later on, I found my own hands were too clumsy to make it work. Nonetheless, seeing someone at work on her own project inspired me to try something new, and I wonder if it has this affect on others – non-knitters included.

This thought makes me want to knit in public more often. I very much like the idea of taking a craft/skill that is often so identified with the private and domestic and bringing it out into the public. I get a lot of stares when I bring my knitting to the bar where L and his friends are watching soccer, but I am constantly surprised and pleased to find they are looks of curiosity, not disapproval. So, as the weather improves, I think I will make more of an effort to get outdoors with my knitting – because why not, right?

(Also, I would like to point out that I’m not the only one taking secret pictures of public knitters. My friend Gustavo tweeted this photo the other day – don’t you wish you could ask her what she’s making and for whom? It looks so lovely and soft!)

One thought on “Seen Knitting”