Really, I could keep right on writing about Georgia, but I’ve been in Yerevan for three days and if I go back to Tbilisi now, I’ll never catch up because we’re leaving for Baku tomorrow. So, Armenia. We’re staying in Yerevan, the capital, where there isn’t really an “old city,” although there are many areas that are clearly Soviet in provenance. It’s a beautiful city, though, and downtown the streets are wide, with wide sidewalks lined with flowers boxes and shaded by large mature trees.

We arrived on Thursday, after driving six hours from Tbilisi, and unfortunately that drive coincided with me getting very sick, which made the entire day a wash (I did nothing by lie on the couch and sleep; it was very unpleasant). The following day my mum wasn’t feeling too well, so we took it pretty easy. We did walk down to Republic Square though, as well as buy a couple of little souvenirs from a local artist’s shop.

All the big important government buildings in Armenia seem to be made of this multi-coloured pink stone. (This one is on Republic Square.)

All of this is to say that yesterday was our first proper day, and we certainly made the most of it. In the morning we went to the vernissage, which is a huge market in the downtown where you can buy anything from antique dishes to jewelry to inlaid wood boxes to carpets to military memorabilia, among many, many other things. I bought a pair of handknit socks, but I’ll write about those later. My parents looked at many carpets, but because we’re going to Azerbaijan next, and Azerbaijan does not get on with Armenia, it would be impossible to buy something that large here and then take it with us to Baku. It’s a shame, because they’re lovely and really reasonably priced, but oh well.

… and military memorabilia such as uniforms and medals.

After that, we met with my dad’s colleague Artem and left Yerevan and headed south, toward Mount Ararat. Our first stop was Khor Virap, a monastery just on the Armenian side of the border with Turkey, at the bottom of Mount Ararat (the place where Noah’s Arc is supposed to have ended up).

If Mount Ararat hadn’t insisted on hiding behind storm clouds all afternoon, this picture would be much more spectacular.

The monastery is beautiful and, beyond its stunning setting, it’s also the place where Grigor Lusarovitch, the man who first introduced Christianity to Armenia in the 3rd century, was imprisoned in a well for 13 years by a king who did not want to be Christian. Like all stories, it’s really more complicated than that, but that’s what it boils down to. My dad and I actually climbed down into the well and although it isn’t deep, there are no windows and not much space – certainly not somewhere you’d want to spend years and years of your life. 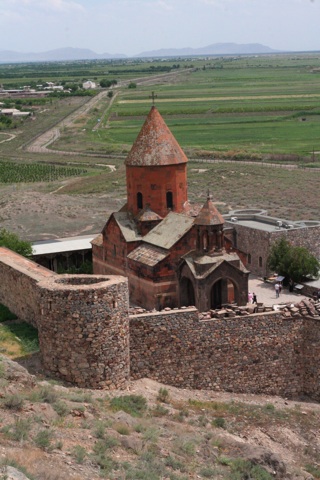 Instead of a picture of my dad’s bum as he climbed out of the well, here’s a shot of the monastery from the rise on the right in the previous photo.

After Khor Virap Artem took us farther into the mountains (the Lesser Caucuses) to visit the Noravank monastery. Monks certainly knew how to pick breathtaking locations, but they were clearly not the practical type. Noravank is deep in the mountains and to get there you have to drive through a long and winding gorge with high rocky walls. It was kind of jaw dropping, to be honest. 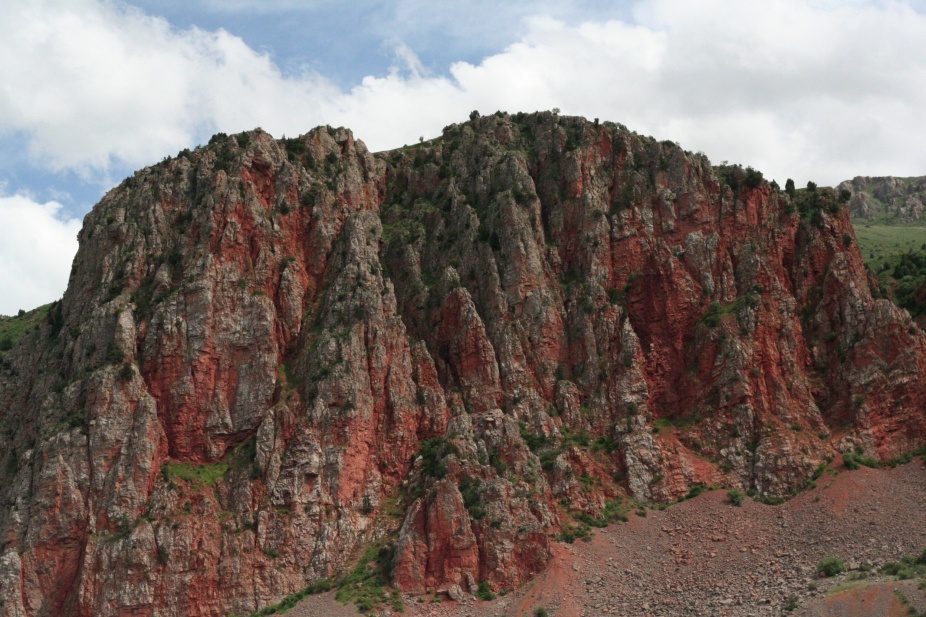 The rocks really were this colour. The strata is also mostly vertical (instead of horizontal, which is what we’re used to seeing), so caves open up between the layers, creating large pockets in the cliff faces.

Outside the primary monastery building…

A second church (or chapel?) they managed to fit on the edge of the cliff.

(And, this is as far as I got before we went out for dinner. And then I packed. And then I went to bed because I had to get up at 3:30 a.m. to take a taxi back to Tbilisi so we could catch out plane to Baku. And then there was no wifi in our apartment, so this post has languished. I’ll finish it now, a whole week and two countries later.)

Our last day in Armenia was a kind of taking it easy day. Yerevan is the International City of the Book for 2012, so we visited the museum exhibit about Armenia’s history of printing (celebrating its 500th anniversary, which is pretty amazing) and wandered around a bit, picking up souvenirs and whatnot. The real highlight of the day, though, came before breakfast, when we climbed the Cascade. 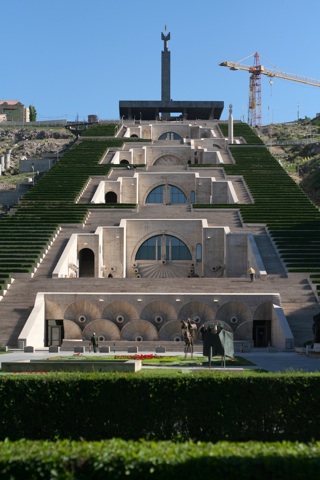 If you think that looks like a lot of stairs to climb before breakfast, well, it was. But that’s fine, because it was totally worth it. The Cascade is preceded by a sculpture garden and is being privately funded as an arts and culture centre in Yerevan. Each of those central landings (with the rounded windows) has a gallery or concert hall or other artistic venue inside (there are escalators inside for those who prefer not to climb in their finery) and fountains or sculptures or both on the outside landing part. There are also boxwood-trimmed gardens lining the outsides of the steps, which, as far as I can tell, are made of limestone.

This is either the third or fourth landing, but I honestly cannot remember.

The white steps rise and rise and rise until all of a sudden they end in a chain-link fence at the top, beyond which is a construction site that has languished since 2009 or so. To continue up to the black platform (the base of the memorial to the Armenian genocide), you have to walk around and then climb more stairs. The plan is to connect the two, and I really hope it happens, because it is a spectacular monument. Also, there’s this view (watch that tallish building in the front): 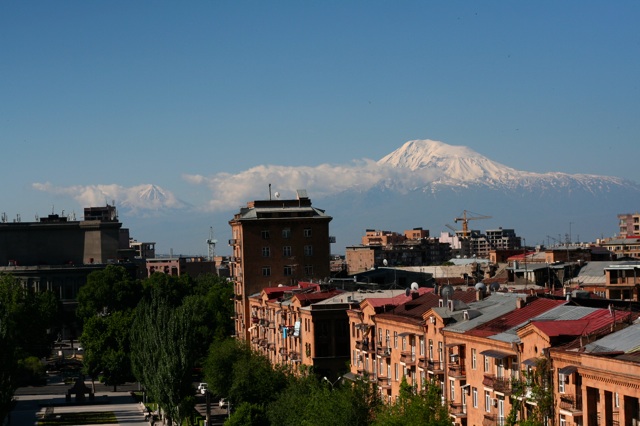 From the second landing.

From the third landing. 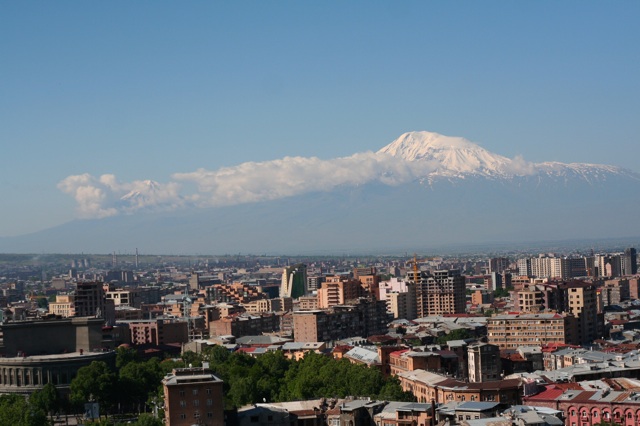 From the top of the white steps.

From the very top, on the black platform.

This is the real reason we climbed it so early. Mount Ararat and Little Ararat get covered in clouds and obscured by haze quite quickly, and although evening is really the best time to go, morning is also good for clear views. We just managed to beat the clouds, but we climbed quickly when we saw them rolling in.

Afterwards we treated ourselves to breakfast on one of the many patio-in-a-park restaurants. Not too shabby.

Category: Out and about Tags: Armenia, photos, shopping, travel