This fall has been rough on my electronics. Specifically, my expensive electronics. September saw my hard drive have a complete meltdown, and although I did have have a mostly-recent back up to restore things from, it was still stressful, especially when I wasn’t sure whether or not I was going to need a whole new computer or not.

I was doing really well in October tech-wise until last night, when L picked up my camera, and flicked it on to look through the recent photos. Or, that’s what he would have done if flicking the on switch had worked. Instead, nothing happened at all. We figured the battery must have died (I mean, the thing worked fine on Thursday and I haven’t touched it since, so…). I charged it overnight, popped it in this morning, flicked the switch, and nothing happened. My camera, it seems is a brick.

I know it’s just a piece of electronics. I know I shouldn’t have a sentimental attachment to it, but I do. I bought this camera (a Canon Rebel XT – the second Rebel DSLR Canon made) shortly after my twentieth birthday. It was the most expensive and grown-up purchase I had ever made, and I bought it with money I inherited from my Grampa Hunter, which felt like a big deal. Three months after buying my camera I moved to France. This camera – in a Ziploc bag, no less – travelled with me around Europe. It came with me to Nepal. It took many, many pictures of my parents’ gardens, my friends, my family, and my cat(s). I took this camera to the States, to the Caucuses, and to work. I have taken a lot of photos of my knitting. I went from relying entirely on the automatic settings to taking photos almost entirely with the manual settings, taking it from a glorified point-and-shoot, to a proper DSLR. A lot has happened in the last six-plus years, and it seems corny to say, but this camera has been a really reliable companion. I’ve dropped it on cobbled streets, taken photos in the pouring rain, and almost never used a camera bag, and it has always, always worked.

Six years is a long time for a digital camera, especially considering how much things have changed in that time. With that in mind, I’m a little excited about getting a new camera. I moved beyond the limits of my camera a while ago, but I’ve been reluctant to upgrade because, like that Ikea commercial, I feel a strange loyalty to all the stuff we’ve been through. This is totally silly, and I know that, but still.

Hopefully the lack of photos in this post is self-explanatory. My BlackBerry camera is woefully inadequate, but I did snap this photo of my finished Spruce Jaywalkers. I will hopefully be getting a new camera this week (I’m thinking of the Canon 60D – what do you think?), so I will have a full post with photos and details when that happens. In the meantime, here you go: 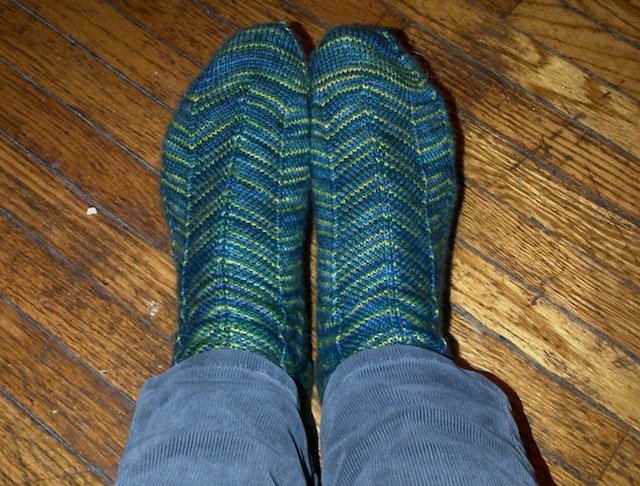