I’m a little embarrassed to admit this, but it would seem that the last pair of socks I knit doesn’t match. At all.

I am not chalking this up to second sock syndrome, though, because there’s a perfectly reasonable explanation for all of this. Let’s start with the sock on the left. I started these, according to Ravelry, on Oct. 30. It was background knitting in November and themn, after finishing the first one, shit got real with my Christmas knitting and the socks were put aside.  (A noble sacrifice, really, and nothing to do with how much I wished they were Jaywalkers like my other ones or how tedious I find ribbing.) 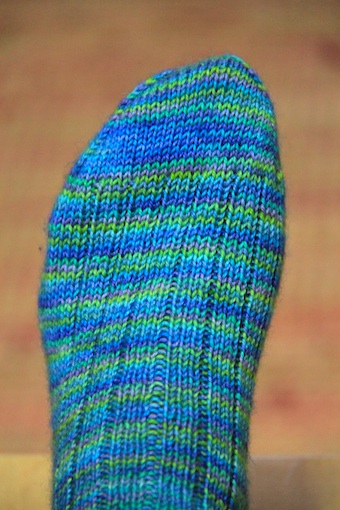 After my Christmas knitting was done, I was determined to knit myself Christmas socks, and since this pair was half-finished it would have been cheating to pick them back up. So, I packed the yarn for my Biscotti socks and left these in Toronto when I went home for Christmas. I didn’t want the distraction of the easy gratification of just finishing one sock and calling it a pair, and I truly didn’t think the Biscotti socks would only take a week.

Hermione’s Everyday Socks, knit in Tosh Sock colourway Jade. It turns out this particular combination is impossible to properly photograph on a cloudy day (the colour is more accurate on Ravelry).

But, they did. And that quick knit combined with potential travel delays forced me to ball up a skein of Tosh Sock I bought at a Boxing Day sale. Nevermind that I didn’t actually need to cast on for new socks in this yarn until after I got home, where the Seafoam socks were waiting. That’s irrelevant. In my mind, I’d already planned new socks in this yarn and so, to scratch that itch, I cast on. They were background knitting in January and now, here I am almost in February, with an entirely mismatched pair.

To solve this problem, I’ve decided to keep trucking away on the green socks and get them finished, and then finish the Seafoam ones, which are in a very spring-ish colourway and thus won’t hurt for the wait. In the meantime, though, I’m half considering wearing them as a pair (even though they would look ridiculous and feel very different on my feet) just because I could really have used another pair of socks right about now.

2 thoughts on “Not quite a pair”