This weekend, it was spring. I don’t know if it’s going to stick around (being from Nova Scotia, I’m programed to expect a big storm in March), but for now, it feels great. I spent a good chunk of Saturday just walking around the city and enjoying being perfectly dressed for the first time in months. It was gorgeous. 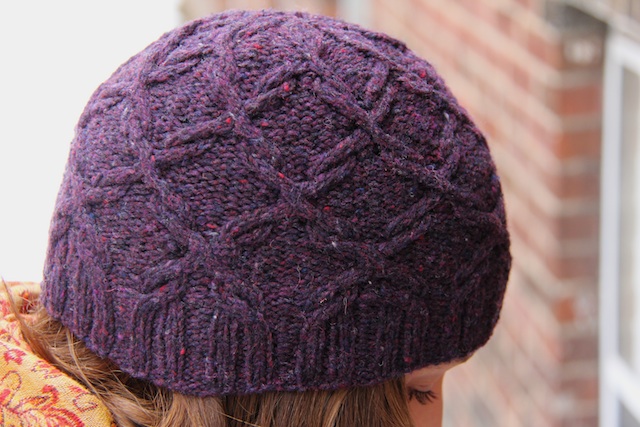 Finished just in time to not need it! This is how people who don’t wear hats plan hat knitting I guess.

It stands to reason, then, that I would finish my winter hat just a week before this warm weather rolled into town. I haven’t blogged about the hat because, even though a month passed between when I cast on and when I cast off, I really never felt like I was knitting it. I am not, generally speaking, a hat person. I am that idiot on a cold day who’s turtled deep into a scarf and bareheaded. I don’t know why, but hats never occur to me. This was a cold winter, though, and when February rolled around and it became clear it wasn’t going to warm up, I decided to cast on. (I do, I should say, have a hat, a nice hat even, but I’ve never knit one for myself and I decided it was time.)

I guess there was too much halo for the cables. I still think this yarn will make a toasty hat.

I chose Scrollwork, by Irina Dmitrieva (from Brooklyn Tweed’s Wool People 4) and, very responsibly, paired it with some stash yarn. I got to the first bit of cabling and realized I’d made a bad choice. The yarn I was working with (this yarn, a wool/alpaca blend that would have made for a soft and lovely hat) was just not going to show off those cables to their advantage. And after the work I was about to put in, that would suck. So, I ripped back and started over with some of the Shelter I bought in New York.

Let me preface this by saying I didn’t swatch. This may be the first hat I’ve knit for myself, but it isn’t the first hat I’ve ever knit, and I know that 112 stitches on a 4.5mm needle will fit my head just fine. So I cast on and went with it. This is a demanding hat. The cables twist and turn and don’t think about trying to watch anything while knitting them because, well, you’ll be hitting pause a lot. I loved the knitting. For the few hours at a time that I spent with the hat, I enjoyed every stitch (well, almost every stitch – I also worry my post-cable purls are too loose) and there’s nothing like working complex cables to make you feel smart. 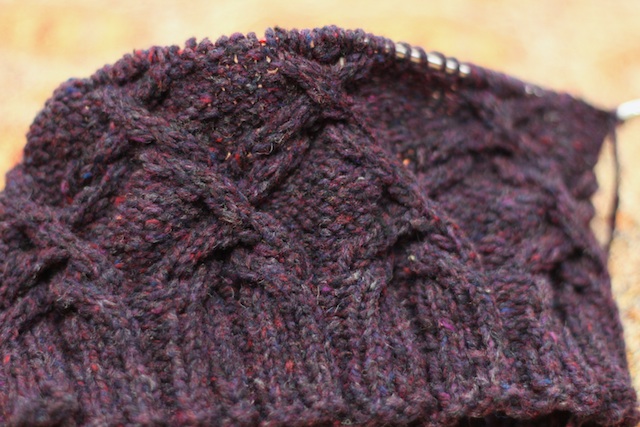 Right around here I started to wonder if maybe it wasn’t looking a little short.

What will quickly make you feel less smart, however, is after finishing your fancy hat and realizing it’s small. In the photos, there is quite a generous slouch, which is partly why I wasn’t worried about fit. I ought to have been. I don’t know if my hat just didn’t grow as much, or if my cables were tighter or what, but not only does my hat not have that slouch, but it is almost too small. I can wear it, but it doesn’t quite cover my earlobes, and a cold day, that’s dumb.

This is a very good representation of the colour. Photo taken before it was spring.

On the upside, I enjoyed knitting it so much I might just knit another one! I am also probably going to have a go at the cowl too, since that would both be fun and give me a winter set. But maybe next year, since it’s spring now.

Details
Pattern: Scrollwork, by Irina Dmitrieva
Yarn: Brooklyn Tweed Shelter in Plume
Needles: 3.75mm for the ribbing, 4.5mm for the rest
Modifications: I knit this exactly as written, except I switched to the larger needle in my last row of ribbing, which made the increase row a little easier to work. Also, of course, I started twice.

3 thoughts on “A hat too late”