Sounds like the title of a nursery rhyme, doesn’t it?

I finished my Hummingbirds last night (apologies for bad photos – I decided to try out my camera’s timer rather than wait for L, clearly I need to practice). This is the second pattern I’ve knit from The Knitter’s Book of Socks and, like Stepping-Stones before it, it was a well-written, clearly presented pattern that will almost certainly become a standard. In the book, Clara writes that these socks (designed by Sandi Rosner) were designed expressly to be used with multi-coloured variegated yarn. That’s unusual for lace, but the idea is that the trellised pattern shifts the colours up and down, breaking up the stacking that would ordinarily lead to pooling and flashing. 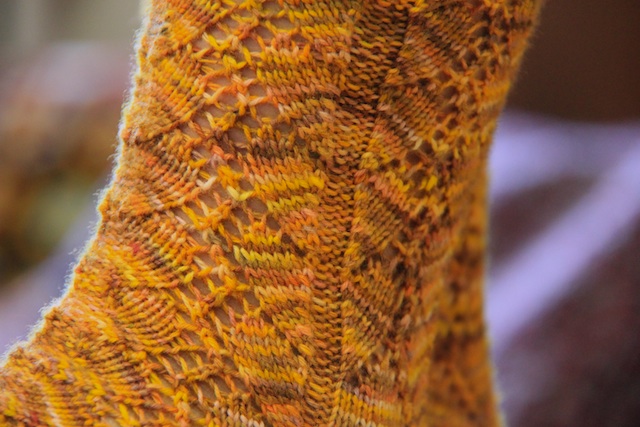 They’re definitely fun to knit, and the 12-row, 32-stitch repeat is an easy rhythm to get into. I didn’t get quite to the point of memorizing it, but a quick glance at the chart was all I needed at the beginning of each row. I did make some modifications (detailed below) and I have some others that I plan to try on the next pair of these I knit (probably with this yarn). I do find these tight to pull on and off (though they’re comfortable to wear, pesky high arches), but, as you can see in the photos, the first sock (which I’ve tried on a few times) has stretched and grown noticeably longer than the second sock. It’s superwash wool, too, so I suspect these will stretch a little once they’ve been blocked (no, I didn’t swatch).

Speaking of the wool, let me tell you about the Hedgehog. This sock yarn is by Hedgehog Fibres (an Irish dyer) and it is one of the loveliest sock yarns I’ve used. It’s smooth and round and so, so soft (85% merino), but its tight twist and 15% nylon content suggest it’ll stand up well too. It isn’t especially springy, but I do think it’ll grow a little. The stitch definition is beautiful and, perhaps best of all, the yarn is hand-painted in such a way as to prevent pooling. No two skeins are alike, and even though this yarn did tend to feature similar colour repeats again and again, even in the stockinette portion of the feet there’s no pooling. I love this yarn so much that I’ve ordered two more skeins. I also have 23g left of this colour, which I will probably use to knit up some more leftover socks one of these days. 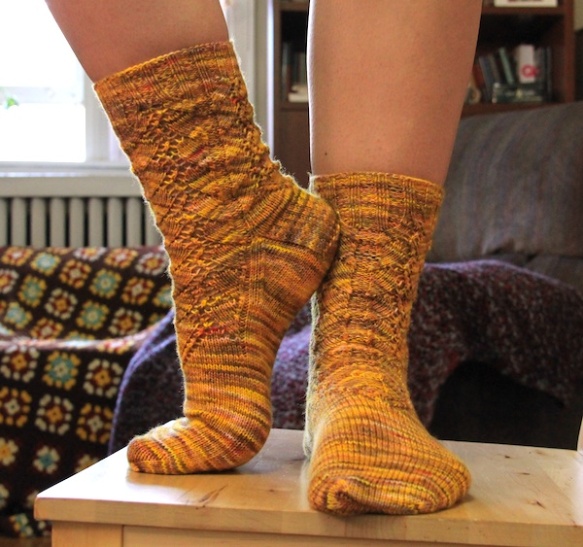 Part of me kind of wishes the charts were shifted so the lace was over the front of the foot and the purls stitches were on the sides, but I guess these are socks meant to be enjoyed in profile.

Details
Pattern: Hummingbird by Sandi Rosner
Yarn: Hedgehog Fibres Sock Yarn in Sunflower
Needles: 2.5mm
Modifications: I knit the leg as written, but changed the heel from a short-row heel to my normal heel flap (I’m hard on my socks). I also added an extra chart repeat to the foot, though next time I’ll add another one. Depending on how these wear, I might also knit them on 2.75mm needles next time. As I mentioned above, these are quite tight to pull on over my heel. The fit is pretty good, though, so maybe a compromise would be to just knit the leg on the larger needle and then make the heel flap a few rows deeper. I also made the toe really wide for some reason (I did the first one a few weeks ago and can’t remember why now), but next time I’ll just knit my normal toe. My notes and whatnot are Ravelled here.

4 thoughts on “Two Hummingbirds and a Hedgehog”