I don’t know how, but somehow all the knitting-related things I ordered in the last two months arrived in my mailbox yesterday. Granted, there were not many things, but still. My sister was visiting for the day and both times I went to the door to let her in (when she arrived and after she moved her car) there was another package. Seeing as she was also in town (in part) so I could teach her how to knit a hat, it felt a bit like fate was telling me to spend my day off knitting. Ahem. 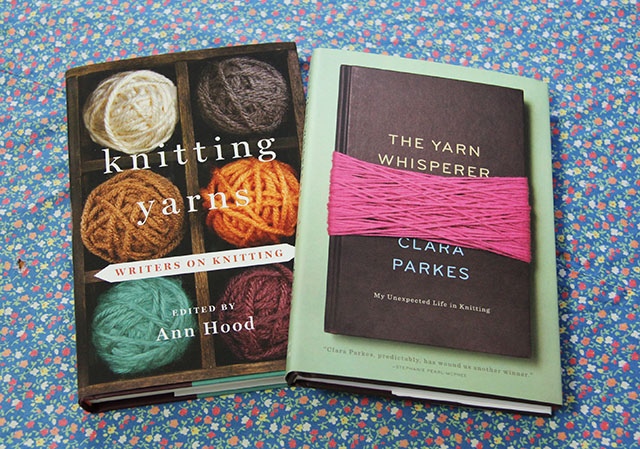 This means I’m pretty much set for the holidays now. I was planning to pick up The Yarn Whisperer anyway, since I own everything else Clara Parkes has written and have found it invaluable to my development as a knitter. I pre-ordered her book way back at the beginning of October, and while on Amazon I saw that I could also pre-order Knitting Yarns: Writers on Knitting, which sounded so entirely excellent that I added it to my cart before really thinking twice (I’m pretty sure I read an excerpt somewhere, too, but I can’t think where now.)

The yarn is a real treat. It’s Gynx Self-Striping Strong Sock in the Christmas Bells colourway, and it is for my Christmas socks. Every year, after all my gift knitting is finished, I knit myself a pair of socks over the holidays. Generally, I cast on right after finishing my gifts and try to cast-off before New Year’s Eve gets underway. It’s a general guideline, though, and last year I cast on my holiday socks before my last gift was finished because I needed some social knitting to do around my family. I thought about knitting myself something fancy this year, but since these socks will be mostly knit while in transit or sitting around with family, it’s better to work on something that won’t require constant attention. With such fun stripy action, I’m thinking this year I’ll knit myself another pair of Jaywalkers.

Do you have holiday knitting traditions?