One thing the Olympics makes clear is that you can analyse every little performance detail forever and it won’t change the outcome: If the snow was firmer, if he’d just stepped to his left, if her takeoff had been slightly later, etc. And so it is with knitting, I think. If I’d just had more time this week, or knit a couple more rows on the weekend, or focused on one project, I’d be done by now. 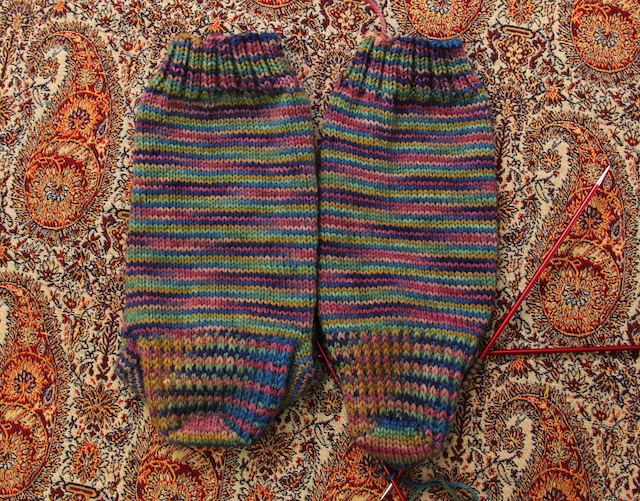 I turned the heel during the men’s gold-medal game this morning, but since I have to work today, finishing these will have to wait.

But I’m not, and honestly, that’s fine. My Sochi socks are three-quarters finished, and if it takes me the next week to get the second foot done, well, that’s how long it takes. Of course, I can say this now, but earlier this week I was feeling a little adrift. There’s something making a goal public – even one that doesn’t have life-changing implications – that makes not meeting it hard to swallow. I think it burned all the more because I was a bit adrift knitting-wise. The weather here has been up and down, and I’m starting to feel the weight of how colourless it is. I think snow is very pretty, and we’ve had a much sunnier winter than usual, but still, months and months without any real colour (aside from fluorescent signs) is oppressive. 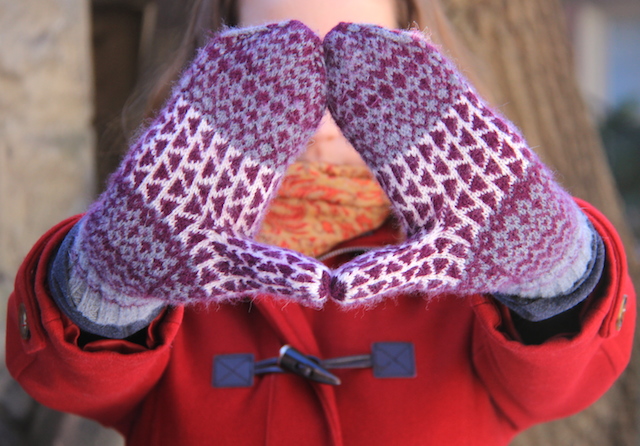 You know those days/weeks where nothing you have on your needles seems interesting or necessary and makes you want to throw it all into a corner and start fresh? Yeah, that was this week for me. I didn’t do it (no time) but I thought a lot about it. I’m over it now (that feeling tends to only last a day or two for me) but it was close. Thank goodness for rainbow-coloured socks.

Anyway. I did finish my Hodgepodge Mittens last weekend (as planned) and although it hasn’t been that cold in Toronto this past week, the have proven themselves quite warm, and pretty close to wind-proof (it has been very windy). The Fresco is so dreamy to wear, and the short floats mean the fabric is compact and dense without being heavy. It’s supposed to get cold again this week, so we’ll see how they stand up, but I suspect they’ll prove warmer than the mittens I’ve been wearing for the last year.

As a bonus, since they were part of the Holla Knits KAL that’s happening right now (thank you for telling me, elloluv!) I got a free pattern of my choosing for finishing! I went with the New Girl skirt, since I’ve been thinking a lot about knitted skirts lately and that one has been in my favourites since it came out. I’m resisting casting on until I finish a few more things, but I am starting to mull over colours and yarns. Any suggestions?

Details
Pattern: Hodgepodge Mittens by Annie Watts
Yarn: Classic Elite Fresco in Graystone, Port Royal, and Parchment
Needles: 2.75mm + 3mm
Notes: I changed the cuff to 2×2 rib (with the smaller needle) because I like my mitten cuffs to tuck into my sleeves, which means they need to be slim. I also added length to the hand by doing a fifth row of the contrast triangle portion and moving the thumb up to the second repeat. I found the thumb opening to be kind of big, so I used the smaller needle for the thumb to keep it from being huge. They’re still slightly big, but not in an awkward way. Ravelled here.