I am so, so happy with this skirt. 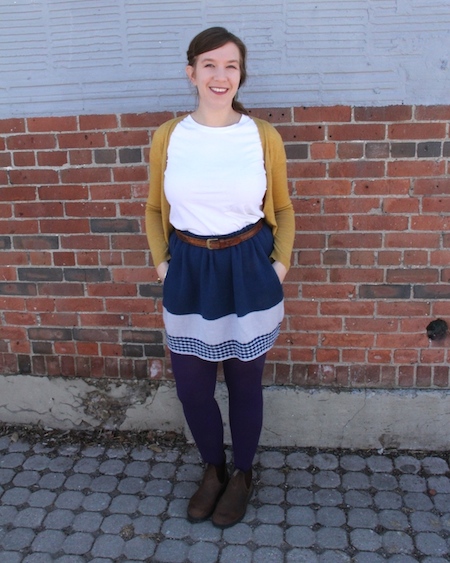 If it works with a t-shirt and a cardigan, it is basically a lock in my wardrobe.

I’ll admit that I was a little worried. Not that it wouldn’t fit, but that I would finish it and put it on and just feel meh. There is nothing worse that working really hard on something with an image of how it will look when you’re done, only to discover that it looks great on the hangar, but maybe isn’t quite your style. I have been admiring this skirt since it was first published, but I was never quite sure if I could pull it off.

I’m getting better at listening to that little voice in my head that points out things about a pattern that might be a problem, or cause regrets, and this time I listened. I didn’t want quite such a full skirt, so I did some math and decided I could get away with half as many increases as the pattern calls for. I also added 1.5 inches to the length (after the pockets) and left off the pocket cuffs. I also thought a lot about colour. Cassy and I talked a lot about colour before we cast-on, and although I was draw to both a dark, forest green and cranberry as possible main colours, I went with blue because that’s a colour I’m used to wearing. I’m not always good at integrating new styles into my wardrobe — especially if they’re different from what I usually wear — so I wanted to make this something I wouldn’t overthink.

I added stripes to the insides of the pockets, just for fun. (L suggests I not make a habit of posing like this in public.)

At risk of repeating myself, I am thrilled with how this turned out. I put it on yesterday for our little photo shoot (we got double-digit temperature yesterday! It was incredible) and it was the first time I’d really worn it apart from fitting the waistband. L thought it looked great, so when we went out last night to trivia night with friends, I didn’t change, and I got compliments right off the bat. One of our friends actually said she thought it was vintage (high praise indeed).

Way back when I was casting on, Audry asked about my yarn choice. I went with Zitron Unisono, which I’ve previously used for socks, and so far I’m really happy with it. Unisono is 100% merino, but infused with aloe and jojoba, which sounds weird but feels amazing. It has five plies, so it’s very round and very springy, so it keeps its shape well but also stretches, which is necessary for this pattern because of the elastic waist. It also made doing the daisy stitch edge much easier. Based on the socks I’ve knit, this is a yarn that wears really, really well. Those are knit at a much tighter gauge, though, so I’ll have to see how this skirt holds up — I foresee it seeing a lot of action this spring.

Details
Pattern: New Girl by Allyson Dykhuizen
Yarn: Zitron Unisono in #1155 (blue) and #1163 (grey)
Needles: 4.5 mm
Notes: My gauge was slightly tighter than called for in the pattern (25 instead of 24 stitches per four inches) but since there’s a lot of positive ease it was fine. As I said above, I did half as many increases for the skirt (k1, kfb, all the way around) which worked out really well, as did adding the extra length (1.5 inches, below the pockets). I also left off the pocket cuffs, though I considered knitting them but leaving out the daisy stitch. If I knit this again, I think I’ll use a smaller needle for the waistband. This one is fine, but I ended up needing to use a black elastic band because I was worried a white one might show through the stitches. I think I’d also make the waist band just a little bit taller — 1.25 inches or so. Ravelled here.

I actually finished something else this weekend, so our sunny photo shoot was a double-whammy. I’m saving that for another post, but here’s a preview. (I cannot believe I was outside in a t-shirt! There was still snow across the park, but in the sun and out of the wind, it really felt warm.)