I know I should write the post about the California LYSs I visited (this is sort of like a prelude), but I feel like it has been ages since I posted anything finished (or, it had been before my Summer Skyps), so this dress is jumping the queue. 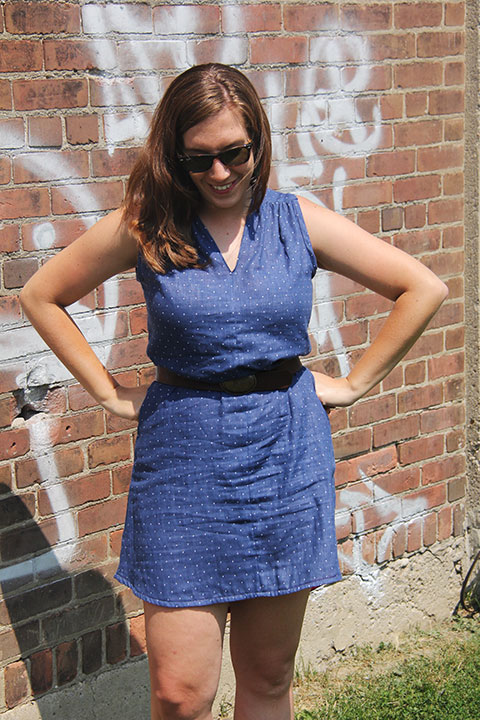 I have done a lot of sewing this summer and, as can be the way when you’re learning something new, I haven’t been very successful. I have sewed a half-dozen tops that are just blah, and it has been discouraging. (I should note that is probably as much due to my poor choice of patterns as it is to my skills. My last few tops have been pretty well made, but are unflattering, so can be donated rather than tossed out.) But, I believe in perseverance, and I know better than to be hard on myself about being a beginner. Even though I would consider most of my July projects failures, they all gave me the opportunity to practice new skills and get more comfortable at my machine, and that isn’t wasted time.

Which leads me to this dress. It’s the Endless Summer Tunic from A Verb for Keeping Warm, and I picked up both the pattern and the fabric while I was there (yes, I copied their example exactly. I wasn’t going to, but then I couldn’t resist). I had already been thinking about trying the pattern out, but what sealed the deal for me was that Verb had it made up in every size, so I could actually try them on to determine both whether it was as flattering style and what size to make. The pattern itself is relatively simple, so I wasn’t too worried about the execution.

I am really happy with this dress. It’s all wrinkled in these photos because we took these in the afternoon and I wore it all morning, but I just don’t care. The style is easy to wear, and I will certainly be able to wear it work, since my office is pretty casual.

To make it a dress, I added three inches to the length (below the pocket marks). Wearing it with a belt definitely shortens it a bit, so I might add another inch (above the pocket mark, I think, so they end up in the right place) next time. I actually left the pockets out of this version, since the double-gauze I used just didn’t seem robust enough to make pockets I’d actually be able to use, but I’m dreaming about another version in Liberty (this leafy one, I think) and it will definitely feature pockets. I like the idea of having a more fall version of this, and a darker fabric will look better with tights I think.

So, what do you think? Is it worth making another one? How to you handle disappointing FOs?