My last finished knit of 2014 was yet another Sunnyside, my third for the year (though the first two feel like they were finished much longer ago). I think it’s safe to say that it has become my go-to knit for a new baby. It’s simple, but with a little something extra, and lots of possibilities for customization, and just look at how cute it is. 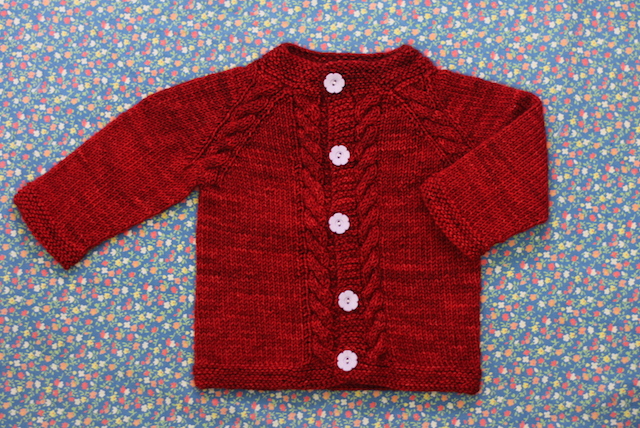 I knit this basically as written, except that I mirrored the cables down the fronts and across the raglan lines.This is for my cousin (due any day now!) and, although I finished this last week (just before New Year’s), I started this way back in September, before we knew whether she was having a boy or a girl. Red with cables seemed like a safe choice at the time, and since we later found out she’s having a girl, I added the lilac-coloured flower buttons to girl it up a bit. I noticed when I was buttoning up the sweater that the little petals on the buttons were snagging in the yarn-over button holes, so I went back and stitched around each button hole to make them both more open and smoother (for some reason, I don’t have a photo of that. Sorry.)

Anyway, this was a very quick little knit, or would have been if I hadn’t been so distracted. When I cast it on in September I worked on it until I was almost done the raglan shaping, and then put it down in favour of, well, lots of other things, but mainly the Wee Envelope sweater* I needed to start for friends of ours (I finished that too, but forgot to get FO shots before I gifted it. Ho hum). I picked Sunnyside back up over Thanksgiving (that’s early October in Canada) and finished the body, and then it languished while I did all my Christmas knitting. I just kept thinking “I only have the arms left, it’s no big deal.” It wasn’t a big deal, really. I knit the sleeves in an afternoon after Christmas and then dithered around for a week and half before I mailed it — and I didn’t want to blog about it until it was in the mail. 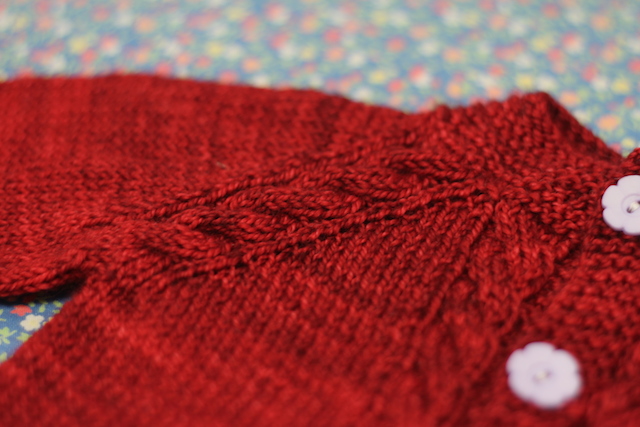 There’s really not much else to say about this little knit except that you’re almost certain to see more Sunnysides popping up over here because it’s such a great little pattern. In fact, our friends (to whom the Wee Envelope was gifted) are also having a girl, which means I have an excuse to do the lace version of this pattern next!

Details
Pattern: Sunnyside by Tanis Lavallee
Yarn: Fleece Artist Merino 2/6 in Ruby (my stash is really starting to earn its keep, let me tell you)
Notes: I have this weird feeling that I actually cast on for the 6-12 month size, and then forgot and knit this as if it was for the 0-3 month size. I can’t be certain, but the collar looks a little larger than it should. Other than that, and mirroring the cables, it’s knit exactly as written! Ravelled here.

*As an aside, I really wish I’d taken finished photos of the Wee Envelope I knit because it was adorable! I will definitely be revisiting the pattern in the future.