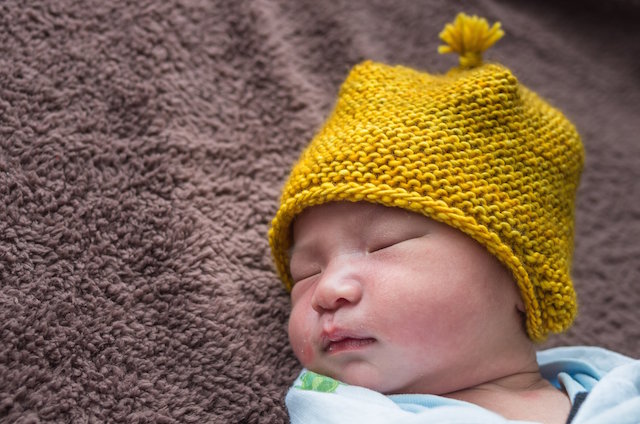 Six weeks ago, two of our best friends had a baby. I already knew I was going to love this kid (her parents are the best — how could she not be!?) but when she held on ten extra days just so she could be born on Chinese New Year, I knew she was a kindred spirit. This is the year of the sheep (or goat), and any baby who wants to be a sheep that badly is clearly going to be showered with knitting. (Also, be warned, there are a lot of photos in this post. Between her inherent cuteness and her dad’s fantastic photos, I couldn’t resist.)

We met little Amber the day she came home from the hospital, and as soon as I knew we were going I decided that whip up a little something to bring with us (besides, of course dinner and treats for her parents). I decided to go with a hat, for both speed and immediate practicality. It was friggin’ cold the week she was born (down around -40C with windchill some days), and as most Canadians learn early in life, a hat is indispensable in the winter.

About a week old.

I thought about going with a hat I’ve already made, but where’s the fun in that? I did a quick search through my Ravelry favourites and decided to go with the Garter Ear-Flap Hat from Purl Soho. It’s ridiculously cute with the little ear flaps, and the funny tassel on top was a huge hit. I knit the smallest size, in lighter weight yarn, and it still came out pretty big for a newborn. It will get her through her first winter though, so I consider that a success.

Details
Pattern: Garter Ear-Flap Hat by Purl Soho
Yarn: Tosh Merino DK in Candlewick
Notes: I sped up the decreases to get a (slightly) smaller hat. You can see my notes (such as they are — I knit this quickly and a little on auto-pilot) here.

She loves it. (Also, maybe I should whip her up some tiny mittens?)

These days Amber is also rocking the Wee Envelop sweater that I knit her months before she was born. I was worried at the time that it might be too small, but it turns out it’s the perfect one-month size, and a big hit.

I wrote about this little sweater in the fall when I was knitting it, but I never got proper photos of it before I gifted it, so it didn’t really get its due here. Seriously, though, what a fun knit. I’ve still only knit the one, but it will definitely become a go-to pattern for future babies (and perhaps for Amber, since there’s a generous size range in the pattern).

I love a good top-down raglan as much as anyone (and my love of Sunnyside has not yet abated), but it’s fun to knit something a little different, and the construction of this sweater is clever in the best way — that is, it’s fun to knit without being needlessly complicated. I also love that, because you knit the sleeves and yoke first, you can knit the body until you run out of yarn (if you want). That, plus the potential for fun buttons, makes this such a winner for me.

Details
Pattern: Wee Envelop by Ysolda Teague
Yarn: Indigodragonfly Superwash DK in My World is All Askew
Notes: I knit this so long ago I don’t really remember if I changed anything. I knit it at a slightly smaller gauge, so I did make some modifications to accommodate that, but nothing that changed the overall look or construction. Ravelled here.

13 thoughts on “Clothes for a sheep”