When it comes to writing about sewing, I am terrible. Part of it is definitely a practice issue — I am definitely a seasonal sewist — but part of it is also that sewing is so much quicker than knitting, which means I have less time process time during which to think about what I’ll eventually say. The result, of course, is a back log of projects, which I find weirdly intimidating to write about (as if, since they’ve been kicking around, I should have more to say). ANYWAY, this preamble is just more procrastination, so I will just jump in.

This was meant to be a test shot, but I actually kind of like the angle. Anyway: I’m not sad, is what I’m trying to say.

As I said, I am a seasonal sewist, so when the warm(ish) weather arrived about a month ago, coinciding with Felicia’s simple sewing series, I was inspired (inspired!) to revisit Grainline Studio’s Scout Tee, which I had tried before but never quite gotten right. I read lots of sewing blogs over the winter, so I was feeling vicariously confident in my skills. I pulled out the pattern pieces, made some alterations, and whipped up this pink floral top. (Would I have said this fabric was my style before this shirt? Maybe not. Why did I have it in my stash? In a fit of spring fever a year ago, I bought four metres of it! Thank goodness I like it so much now). 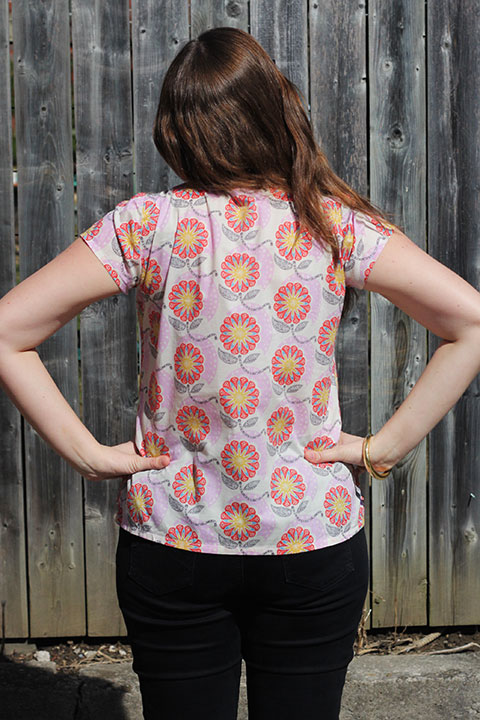 This spring fever Scout is a very, very wearable muslin. It does billow a little in back, so I made a few tweaks before making a second one. 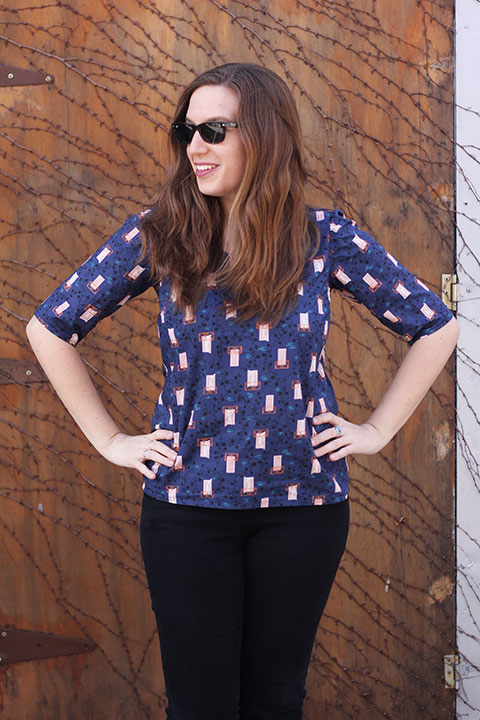 I love this fabric. Love it. And it’s even better for being navy — my go-to neutral — since that makes an otherwise whimsical print very easy to wear. I am a big fan of elbow-length sleeves (I often roll my regular sleeves up this high), and it’s a great length for spring. These sleeves are slim enough to fit comfortable under a cardigan, but still have enough room to move around in. I suspect I’ll make a couple more tops in this style for the fall, though its probably safe to switch over to t-shirts for now.

Another test shot that worked out pretty well!

So, what do you think? I have two more of these to blog about (I don’t have photos, or I’d have lumped them all in here together), so I hope it isn’t deadly boring. Is anyone else feeling the urge to sew as the weather warms up?

Edited to add: I completely left off the usual Details part of this post. Maybe if I treat sewing FOs the way I treat knitting ones, the blogging will be a little easier? Hmm. Anyway, here it is:

Details
Pattern: Scout Tee by Grainline Studio
Fabric: Anna Maria Horner Voile in Cell Structure in Americana (from Field Study) and Cotton + Steel Lawn in Window Vine (from Homebodies)
Notes: I honestly can’t remember what size I started out with, so I’m not sure helpful these modification notes will be (I think I may have started with a size 8, based on the finished garment measurements). Anyway: Initially I did an FBA and graded the side seams in two sizes at the waist. I noticed that I had a lot of extra fabric at the centre front (a lot), so in a move that worked for me (but might not for you!) I cut an inch off the pattern piece (thus taking two inches out of the centre front; as I said, there was a lot of extra fabric just sitting there, yet the top didn’t fit properly at the sides without the FBA). I then re-drew the neckline and did a slight broad-back adjustment to make up the difference. I also added an inch to the length and did French seams where I could.

I should note that because I started all these alterations months ago (there was another muslin somewhere around the holidays) that part of the reason everything is in a jumble is because I didn’t really know what I was doing. Undoubtedly choosing a more appropriate size from the get go would have lessened the alterations. This really is a simple and straight-forward pattern if you don’t go crazy overthinking it (as I sort of did). In the end, though, I’m happy with the pattern pieces I have, which is the main thing.