I intend to do a proper debrief/round up post about Me Made May at the end of the month, but given how quickly our free time is getting booked up, that might not be as prompt as I’d like (or it might — schedules can be tricky to predict). Anyway, with three weeks down I think I’m far enough into this thing to check-in. I’ll do it in point-form, so I can keep myself organized. 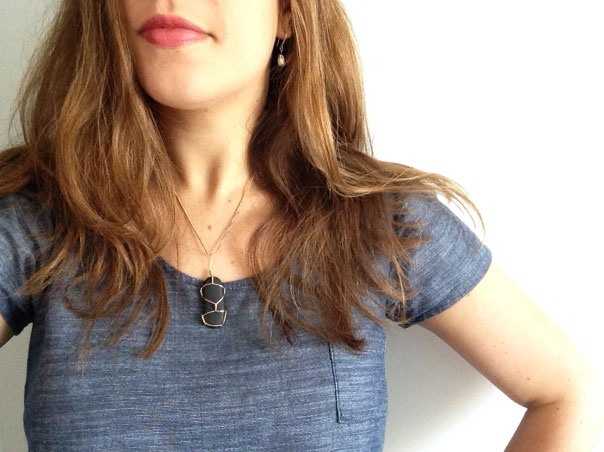 One of my most-worn garments: My chambray Scout Tee. (This, and the other photos in this post were taken with my phone and grabbed from Instagram, in case they look familiar.)

1. Taking selfies is time consuming. I’ve been pretty good about posting daily photos to my Instagram (my planned wrap post will include photos, like last year’s if you don’t want to click through), but they take way more time than I thought they would! I do think my photos have improved since the first few days, but because of lighting/mirror restrictions in our new place, I’ve had to get better at turning the camera around, which has led to lots of similar poses and attempts to take photos of what I’m wearing without appearing to strain at the effort. Usually, that requires a few attempts, and it has not been a smooth addition to my morning routine, which is otherwise very organized/well-timed. It’s getting easier, but that first week or so involved a lot of rushing out the door at the last minute.

2. I’m not as self conscious as I was. It might be a weird thing for a blogger to say, but I’m not actually very comfortable putting myself out there on social media. This blog has always felt a little removed from that — public, but private too — and even here I don’t actually feature in many photos. I’ve still kept my face out of most of the MMM photos I’ve posted (this being the exception), but that’s been mostly about logistics (my arms are not long enough to get my face and my outfit in a photo, and I refuse to buy a selfie stick). The first week was kind of uncomfortable, if I’m being honest, but I’m getting over it. 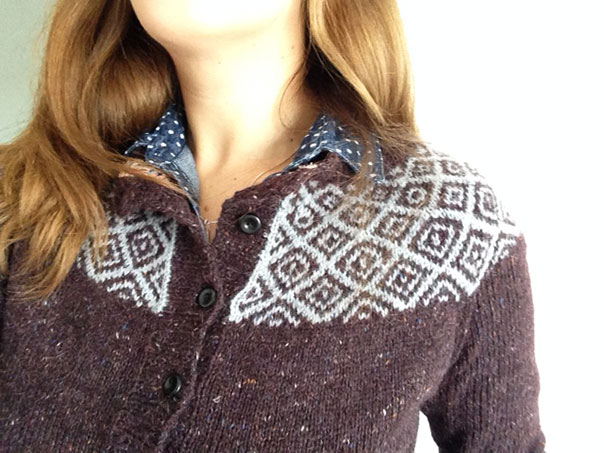 I can’t believe it was cold enough to wear my Epistrophy this month, but I was happy to have an excuse to mix up my options a little.

3. Beyond the whole daily photo thing, which isn’t even a requirement of MMM, I feel really good about the handmade items in my wardrobe. I plan to write about this more another time, but one thing I’ve noticed over the last few weeks is how much I like the clothing I’ve made for myself. That sounds like a weird thing to say, I realize, since what’s the point of making things if you don’t like them, but there are no guarantees: lots of things can go wrong and while in knitting you have the option to rip everything out and start over, that doesn’t often work in sewing. When I first started to sew clothes for myself, I was prone (like a lot of beginners) to settle — this version is so much better than my last one — and end up with items that demonstrated a lot of learning but not much style. Improving my technique has meant letting go of those early garments in favour of ones whose construction and fit and overall appearance I’m really proud of.

4. Documenting what I wear every day has given me a different way to think about my wardrobe. Me Made May offers a funny constraint: What you want to wear meets the limitations of what’s available. I guess that’s an everyday constraint no matter what, but when I run up against the what I want to wear/what’s available, it has forced me to really think about what it is I want to be able to wear on a regular basis, handmade or not. But, especially where handmade is concerned, it’s been interesting to see which items I wish were always clean, versus which ones hang in my closet unworn until I’m desperate (ie: it’s laundry day). In a lot of cases, there’s nothing wrong with the things I’m not wearing, but for whatever reason, they don’t interest me. MMM has offered a reason to embrace some of these items anew, which is nice, but it’s also forced me to think about why my favourite items are my favourites — whether it’s cut or fabric or fit — which in turn as informed my to-make list. Obviously, I want to try new patterns and fabrics, but if there are a few that I reach for the minute they’re clean, that’s probably a sign that making another, similar item would be a good bet (hence why I have so many Scout Tees, I guess). 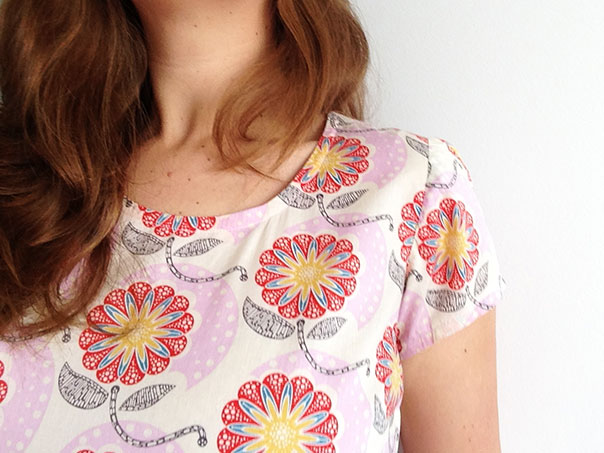 And, speaking of Scout Tees, here’s the original! Not the first one I made, but the first one that fit the way I wanted it to. I wasn’t sure about the print, originally, but I kind of love it now.

5. I have more handmade clothes than I realized. Last year, MMM was kind of a struggle after the first week or so, but this year has been so much easier. I have enough items that I don’t feel like I’m wearing exactly the same rotation week after week, though to some degree the cooler weather helped with that, since it let me lean on my knitwear a bit. I could use a more varied colour palette, but otherwise I have a pretty respectable number of pieces to choose from. And thank goodness! I prefer not to do laundry every few days, so having a bigger selection has taken that pressure off this year.

I’ll stop there, lest I start getting repetitive, but the main thing I think is that I’m having so much fun this year. I love clicking through to the hashtags to see everyone else’s work, and instead of feeling burnt out, I’m just so inspired. If you’re taking part, let me know!

Categories: Knitting, Sewing Tags: Me Made May, MMM16, Scout Tee