It only took 2.5 years, but Halligarth is finished!

I have loved this shawl since it was published, ordered yarn for it almost immediately, and cast on for it in June 2014. I can’t remember how far I got, but at some point that summer I put it down without any notes, in the middle of a repeat. When I picked it up again in the winter of 2015 (I think), it took me a while to get back in to the groove with the pattern and, after working a couple of repeats, I put it down again.

In the years that this has languished unfinished in my WIP basket, I wished many times that my past self had been more disciplined about buckling down and finishing it. Without being too glitzy, Halligarth is an excellent fancy-occasion shawl, and we have been to weddings and parties where having it as a wrap would have been ideal. But, apparently, not so ideal that I was actually inspired to pull it out again.

Until now. The week after Christmas — the day, in fact, that I cast on for Oda — I decided to see where I was with Halligarth. It turned out I was in a pretty good place. The last time I knit on it, I did myself the service of finishing the repeat, so starting back in was pretty straightforward, and then it turned out that the lace pattern was much, much more intuitive than I had remembered (my skills have improved a lot since I started it, I suppose). 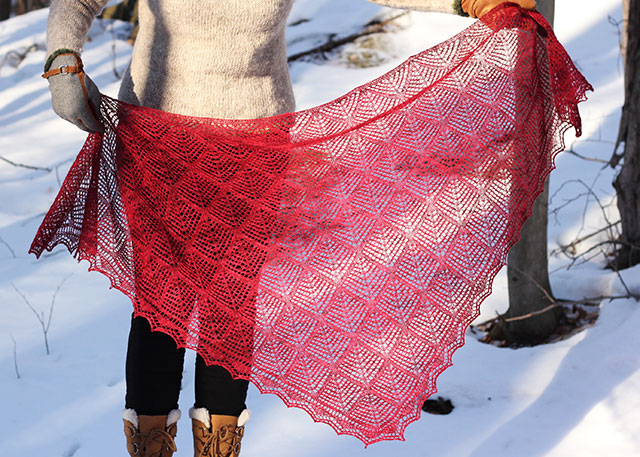 After blocking, it measures about 75 inches across and 35 down the centre spine.

Halligarth is written for two sizes, and when I hit the point where I would start the edging for the smaller size, I weighed my yarn to see how things were looking. Back in 2014, I decided to knit this in laceweight, and bought a gorgeous skein of BLF laceweight from the then-newly opened Georgian Bay Fibre Co. They no longer sell laceweight, though, so I knew I had no way to get more yarn if I ran out. Still, when I hit the small-size stitch count, I had 51 g left. I wanted a big shawl, and it seemed like I’d have enough to knit the big size, so I added a lifeline and kept going.

I won’t lie, I came close to putting it down again. The last few repeats are looooong. And, in laceweight, it takes a while to really see progress. For a while, I really thought I might never finish (or that my yardage would fall short), but I made it with 7 g to spare.

And you know what, it was totally worth it. I love this shawl. It is incredibly light (less than 100 g), nice and big, and elegant without being too fancy to wear with jeans if I want to. And that colour… The yarn in general is an absolute delight and if it were still available, I would definitely buy more. As it is, I am considering order a sweater’s worth of one of the heavier bases before the shop goes wholesale-only. BFL is such a lovely fibre to work with and wear, and it’s hard to come by. 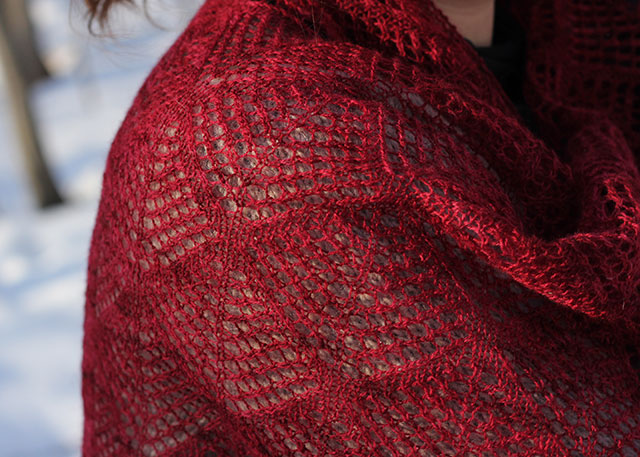 Anyway. I think it’s hilarious that the first thing I finished this year was started in 2014, but I also think it bodes well. If this is a year about action, what better way to kick it off than by finally finishing the shawl I’ve been wishing was in my closet for years?

16 thoughts on “A long time coming”