I have a pretty substantial (for me) backlog of finished knits. Chronological order is all well and good, but since both of these little sweaters use the same yarn in different ways, I thought they’d make more sense as a pair. 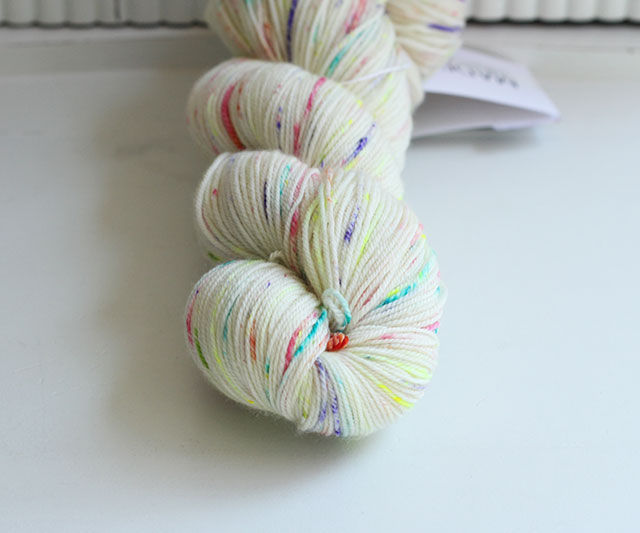 These speckles — which, in the context of kids’ clothes, seem more like sprinkles — are courtesy of the Madeline Tosh colourway Cosmic Wonder Dust. I picked up one skein of it, in Twist Light, a little over two years ago with some vague idea it would be fun for something kid-related (possibly I had Rocky joggers in mind, but I don’t remember anymore). 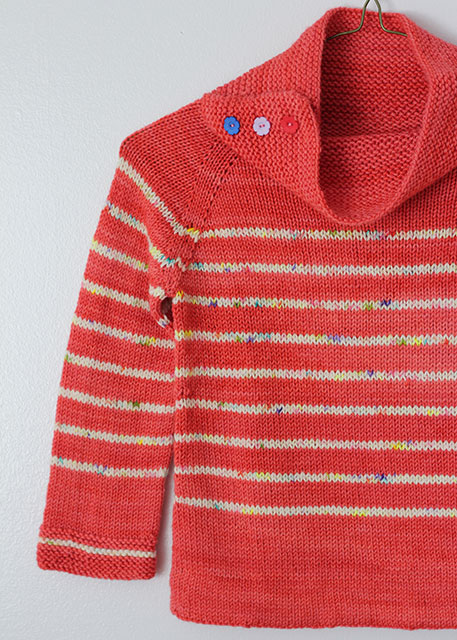 Anyway, when I was planning what to knit for our little friend Amber’s second birthday, I came back around to the speckles. I’ve been trying to use my stash better, and one of the ways I’m making that work is by thinking about fingering-weight yarn for more than just lightweight projects. Generally, I can get a nice DK-weight gauge by holding fingering-weight yarn double, which makes for a lot more options when it comes to using my rather large (for me) stash of fingering-weight yarns — especially all the single skeins.

Pattern-wise, I settled on Gathering Stripes (though I also considered Sprinkle by Jenn Emerson) because it is a favourite of Cassy‘s and I figure that with two little girls of her own, she knows what she’s talking about. In a non-stash-busting move, I picked up a nice DK weight for the main (and then used just about every inch) and used the speckles (held double) for the stripes. 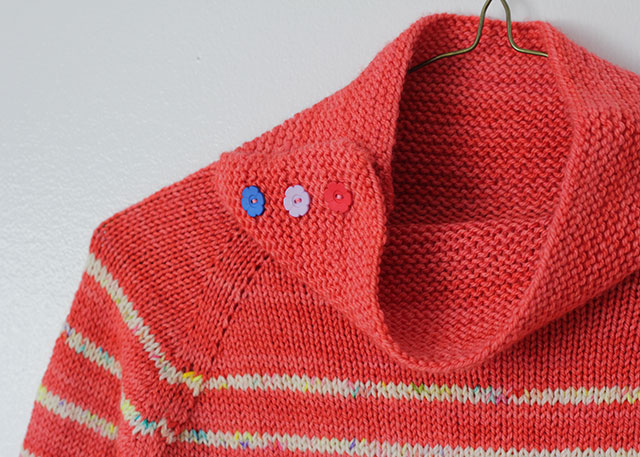 I love the way the speckles splash across the stripes, and that the slightly denser gauge of the doubled yarn (same stitch and row gauge, but a denser fabric) gives this sweater a little structure without making it stiff. The yarn I used for the main colour feels amazing (I would swear it was a silk blend, though the label says otherwise), and gives the cowl neck a lovely soft drape. I used three different buttons, since I had them and it seemed like a fun echo of the speckles, and honestly, I love this little sweater. It’s big enough that it should get Amber through a few winters, and will certainly not be the last one I knit. 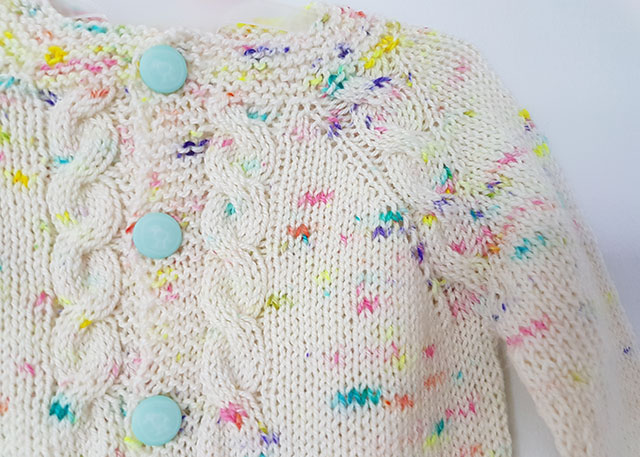 Even held double, though, I used just less than half the skein, which left (I thought) plenty to whip up a little Sunnyside cardigan a few months later. Sunnyside is one of my go-to baby patterns (I’ve knit it three times before), so when we knew we were expecting, it was one of the first patterns I added to my queue. I thought I had enough of the Tosh Light to knit the smallest size, but once the body was finished it was pretty clear that I did not have enough for the arms. 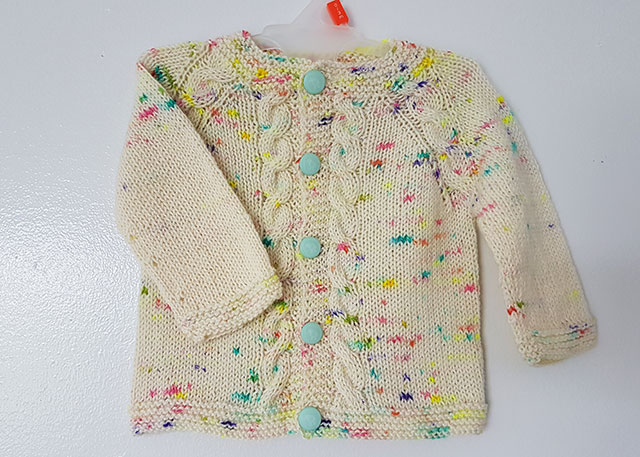 The colours are more accurate in the first photo, but this one shows you how plain the arms are in contrast to the body.

Luckily, I had a skein of TFA Blue Label in Natural sitting in my stash and the whites matched! I alternated a little with the Tosh I had left, so there are some speckles down the arms, but they are few and far between. It doesn’t really bother me, but it does make for a funny contrast — one I could probably have avoided with better planning and/or ripping back the body a bit to introduce a second colour. But oh well. The finished cardigan is pretty cute and I’m not going to mess with that!

So, there you go! Two very different applications for the same yarn, and very satisfying stash busting. Kind of makes me wish I had more of this one on hand…

(Bed rest continues apace, with quite a bit of knitting to keep me feeling productive. More on that later.)