It has been almost exactly 8 months since I posted last, and it seems like a pretty obvious thing to say, but, things have happened in that time! Most notably, life-wise, L and I are expecting our first baby! If you follow me on Instagram, this isn’t new-news (and maybe it doesn’t come as a surprise anyway). To catch you up either way: I am due in mid-November, we didn’t find out the sex, we are very excited.

A week ago, I was put on bed rest. The baby, it seems, is eager to meet us, so I have been assigned the task of fighting gravity by spending my days reclined and calm. Of all the reasons to be on bed rest, this one seems like maybe the best one. The baby and I are both in excellent health, and I feel really good, so besides the very abrupt lifestyle change (no more work, no standing, no more most things, actually), the last week has gone pretty well.

As the title of this post suggests, I’m on strict rest until I reach 36 weeks (a little over 3 weeks from now), and since knitting is one of the few activities I actually can do, it seemed like a good time to get back to this blog that I never really meant to give up in the first place. I have quite a back-log of knits to talk about, most of which are even photographed (thank goodness, since my limited mobility means new photos are going to be pretty basic, styling-wise — see the photos in this post for an example of what I mean), but my main motivation is really just to break out of the little bubble I’m now in. Bed rest is a bit isolating, especially if you are somewhere you haven’t yet lived for a year, since that limits the number of visitors you can expect.

But, in the spirit of making the best of things, here I am! I have been meaning to get back to blogging for months now, and finally I have the perfect excuse. So, hello! Maybe a chronological recap would make the most sense, but oh well. For a baby set to be born on the doorstep of winter, little hats seem like an item we probably can’t have too many of. The three in this post (presented in reverse-chronological order — the green striped one was my first bed rest project and very speedy) represent three of the typical styles you see for baby hats, and I find each one charming in its own way.

I am really happy with how the stripes worked out on this. I love the way the colours in the Autumn yarn plays against the solid purple.

The middle one is the smallest. I really should have gone up a needle size, but it is so friggin’ cute (and if the baby is early, it might even fit). It took almost no yarn at all, so I might just knit a second, larger, one and then have two. It was fun to knit and very quick, so I don’t see that as a terrible compromise. The bobble one was also a fun little knit, and of all the similar patterns out there, seems to have the best fit around the bottom (so many bonnets in this style look loose around the base of the head, which just seems draughty). I really like the vintage look of it, and can definitely see myself knitting more bonnets in this style. The top one, in green, is so absurdly soft. I whipped it up in just a few hours (spread over a couple of days) and it was one of those delightfully simple knits that seem to make themselves. It is small, but stretchy, and should fit no matter when the baby comes.

Three hats is probably sufficient for now, but I will probably whip up a little Garter Ear Flap Hat too, sized for the baby to grow into. I cannot resist that pattern, and if this winter is anything like the last one, a cozy selection of hats will not go to waste.

You’ve heard about it all of it, but a parade of finished and gifted knits is excellent closure. Plus, I didn’t really publish any proper shots of the finished pieces in case there were spies, so now you can see everything in its glory.

First up, the Daphne socks (a Cookie A. pattern) I knit for Jenny using Indigodragonfly Merino Silk 4-ply sock in Don’t You Have an Elsewhere to Be?. They were the first gift I finished and, weirdly, the first to be opened. They fit her very well and she says she can’t wait to go to a party where she can show them off.

I am going to have to knit myself a pair of these very soon I think.

Actually, technically speaking, L’s hat was the first gift to be opened, but that’s because we don’t spend Christmas day together, and instead exchange gifts on our anniversary the week before. I knit him a hat for his birthday in January (I was about to say last year, but that’s not quite true), and it has been well worn to the point of extreme fuzzy-ness. Thus, a new hat was in order. He requested dark grey, I obliged with Misti Alpaca Tonos Worsted, a gorgeous hand painted alpaca/wool blend in Marcasite. (The pattern is Horatio by Kristin Hanley Cardozo and I will almost certainly knit it again – it’s an excellent man hat.) 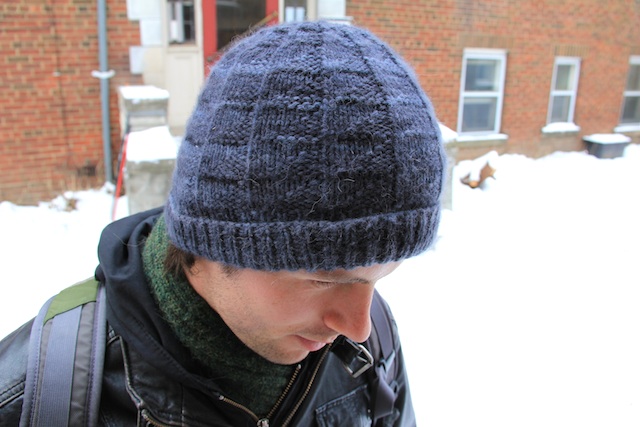 My dad’s hat was something I half-planned for a while and then executed at the last minute. Initially, my plan was to design a fair isle hat in subtle greys, but I didn’t do it and then ran out of time, so things changed. I picked up some SweetGeorgia Superwash Worsted in Slate from the shop and, after a quick browse on Ravelry, settled on the Men’s Mock Aran Men’s Hat by Heather Tucker. It was basic enough to be an everyday hat for my dad, but interesting enough that I didn’t resent it during the knitting.

Next time I knit this, I’m charting it.

After starting a pair of mittens for Connie and then deciding that both pattern and yarn were wrong, I switched to these Lily Mittens by Annemor Sundbo. I ended up using some Louet Gems from my stash (in Willow and Navy) and, honestly, I couldn’t be happier. The Louet was really nice to work with and the finished mittens fit perfectly. 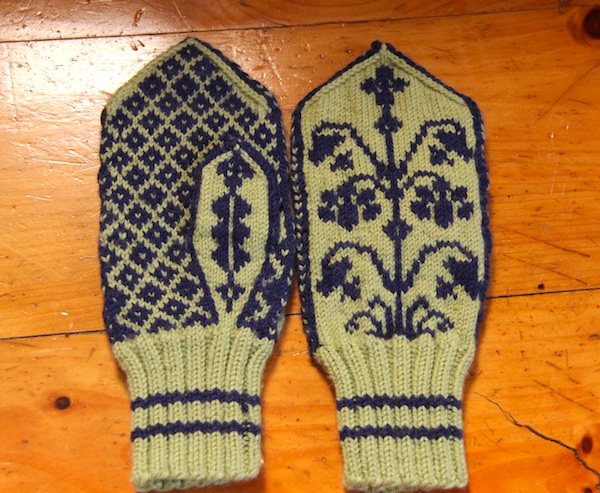 The back of the thumbs are surprise stripes! (The thumbs are also made up because I forgot the chart at home.)

Finally, the tea cozy. What a friggin’ saga. I finished it in good time and then sewed in all the ends and then went to the workroom and sewed a lining before I left. I did think it looked a little big, but my mum’s tea pot is enormous, so I didn’t think much of it. I tried it on the tea pot when I got to my parents’ and wouldn’t you know, it was enormous. Luckily, I had not yet sewn in the lining, so I threw the tea cozy in the washing machine for a little felting action and, when it got about as small as I could make it without risking over-felting, I cut and re-sewed the lining and then sewed it in. Phew. It’s still a little big, but my mum is thrilled anyway because it’s the first tea cozy that’s ever actually covered the entire tea pot.

I don’t know why the colours came out like this in the photo. They’re much more accurate here.

(I think where I went wrong was that, when I took my original measurements, I added in some positive ease when I wrote down the number. When I went to knit the thing, though, I forgot that and added more ease. That’ll teach me to keep better notes.)

I don’t really have pictures of the mittens I gave my grandmother (besides those you’ve already seen) or the foot tubes, because I didn’t have my camera on me when they opened them. The mittens were a perfect fit, and I’ve heard nothing at all about the bed socks, so that’s anyone’s guess. The main thing, though, was that I managed to finish everything on time without going crazy (or becoming a shut-in) in the meantime.

How did your holiday knitting go?

No, not a hat for a pumpkin. I’m clearing this up because yesterday, a woman came into the shop looking for needles with which to knit a pumpkin hat. When I said I had just knit one too, she laughed and said, “No, not a pumpkin-shaped hat, a hat for a pumpkin.” Since that’s maybe a thing, I thought I would clarify.

Anyway, pumpkin hats. I have been planning to knit one for Baby Roud (who was born on Oct. 2 and is a little girl and just adorable) ever since, well, before she was born. I think babies should have funny hats, because it’s funny, and pumpkins in the fall are pretty cute without delving into the range of potentially tacky or overly embarrassing. I looked around for a while to find the right pattern, and eventually settled on this one: Kürbis Baby Hat by Natalja (kürbis being German for pumpkin, apparently).

I changed the pattern a little, to make it smaller for a newborn (I cast on 10 fewer stitches and knit it on smaller needles) and after a few hours I had an adorable little pumpkin hat.

It’s the curved stem that really gets me.

It is quite little, although it stretches, so I donated the original to the shop and I’m making a second, which will go to the baby. This time, I’m going to work the recommended number of stitches (10 more than last time), but stick with the tighter gauge. Honestly, it’s so quick and so cute, I think every baby I know is going to get one from now on.

Details
Pattern: Kürbis Baby Hat by Natalja
Yarn: Filatura di Crosa Zara in colourways 1928 (green) and 1939 (orange)
Needles: 2.75 mm for rolled brim, 3.25 mm for the rest
Modifications: For the first hat, I cast on 65 stitches, increasing to 70. I also purled a row to stop the brim from curling, which turned out to be unnecessary. For hat two, I cast on 75 stitches, which I will increase to 80. I won’t bother with the purl row, and when it comes to the decreases, I’ll make them all k2tog, since the ssks look messy. Photos of Pumpkin Hat 2 to come.