You dress in layers. If you go during the shoulder season (essentially equivalent to fall and spring in terms of timing, but not in terms of weather, which can be very unpredictable), you wear several layers, at least a few of which are wool. L and I both have a few of those thin, fine merino wool base layers, but what we lacked before this trip was heavier, more rugged wool sweaters. So, I spent the summer changing that. 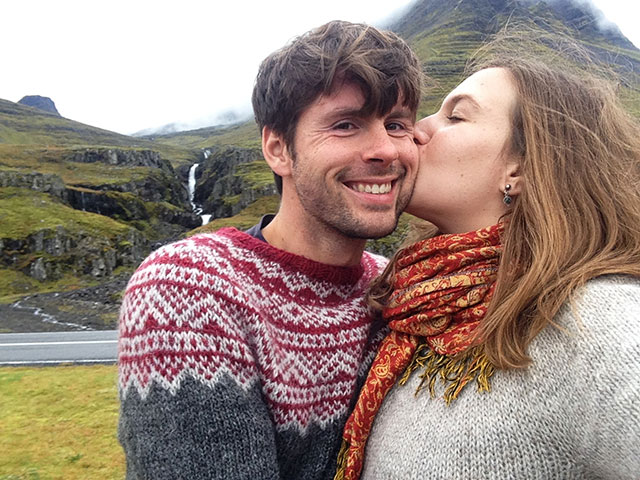 I thought a lot about what I wanted to knit myself for the wedding (a wedding shawl seemed like the obvious thing until I realized that I really didn’t want to cover the top of my dress at all) before deciding that knitting something for our honeymoon would be just as special. Plus, as I mentioned previously, I ended up knitting L a pair of wedding socks, so we still had a little hand knit element. 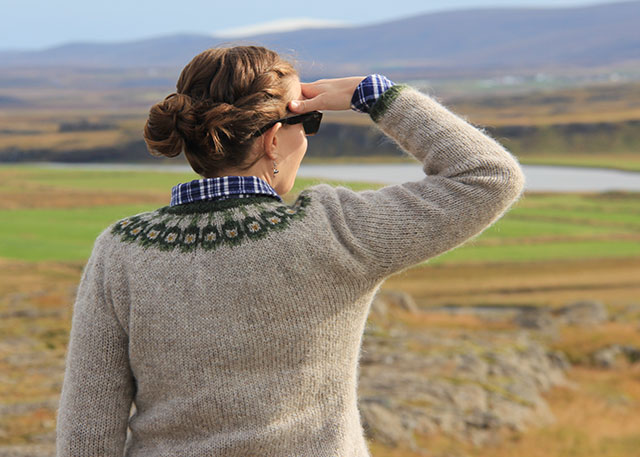 You can see the extra fabric around the tops of the arms/shoulders, but the colourwork part of the yoke is perfect.

My sweater flew off the needles. I had heard that Stopover, by Mary Jane Mucklestone, was a speedy knit, but whoa. I am quite pleased with the finished sweater, though there’s a bit too much fabric around the shoulders I think. I debated ripping back and changing the pace of the decreases, but the extra fabric didn’t bother me when I was wearing it, just in photos. This sweater was used as a pillow, shoved into bags, worn under a backpack, worn to restaurants and while hiking, and it came through pretty much unscathed (just a little fuzz on the forearms, which can be easily dealt with).

I’m quite pleased with how this turned out. I’ll need to work on improving the neckline for the next sweater (this one stretched out quite a bit). Maybe I’ll try casting off and then picking up the stitches for the rib, for some extra structure.

L’s sweater isn’t really Icelandic in any way except that I used lopi. The pattern — Galdhöpiggen, by Erika Guselius — was only available in Swedish when I knit this (there’s an English version now), so I spend a fair bit of time with Google Translate and, in the end, mostly winged it. I knit L’s sweater as a looser gauge than the pattern was written for, both because it was faster and because he really didn’t need a dense wool sweater to stay warm. I made sure my stitch counts lined up with the charts and then knit to his measurements, with about zero ease before blocking. It blocked out to a couple of inches of positive ease, and grew a bit more as he wore it and pulled it on and off throughout the day. He wore it every day we were there (every. single. day.) 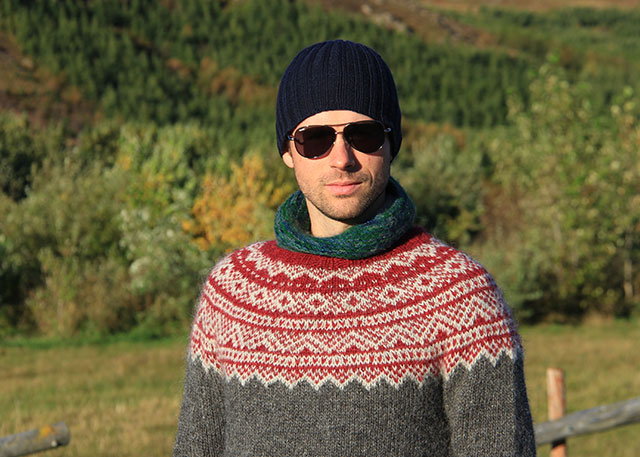 I haven’t quite gotten around to washing and re-blocking these sweaters since we got back (and they do need it), so I’m not sure if they’ll shrink back at all, but let me just say: lopi stretches. It doesn’t have any of the bounce of merino or even BFL, so when it stretches it just stays stretched. I’m hoping a slightly warm soak will help get things back in place, but that is definitely something I’ll be keeping in mind when I knit our next round of sweaters (of course we bought wool for one more each while we were there).

L’s eventual sweater is on the left, mine is on the right. I thought I’d go for colours too, but I couldn’t decide, and in the end decided I couldn’t go wrong with neutrals.

L’s sweater actually took a lot less time to knit than I anticipated, so I had time to knit a few other things in addition to his socks. He is actually quite well equipped in terms of cold weather hand knits, so I did a quick survey of what I needed and in the three weeks before our wedding knit myself a headband, a cowl and a pair of fingerless mitts. Of the three, the mitts were the most successful and have taken up residence in my purse because they are perfect for the rapidly warming and cooling temperatures of this time of year. The headband is great too, though I find it a little itchy across my forehead. I’m going to try soaking it with a little conditioner to see if that helps. The cowl I knit three times and I’m still not quite happy with it. It’s just a bit too loose to really keep me warm, so I think I might rip it out one last time and knit it up with 10 to 12 fewer stitches. It’s a quick knit (I knit it twice in one day), so I’m not too worried about that being a major undertaking.

Kind of a ridiculous picture, but the only one in which headband, cowl and mitts are all on display. (I meant to get some proper pictures of each, and then forgot.)

Of course, not everything we took to Iceland was new. L wore his cowl, gloves and this hat regularly. I stuck my Norby hat in my bag at the last minute was so glad I did, since I actually wore it quite a bit. My Epistrophy sweater was in regular rotation with my Stopover, and on a couple of the warmer days I wore my Stasis sweater. Plus, we both wore hand knit socks every day.

Epistrophy was a perfect mid-weight sweater to bring. I actually layered it under my Stopover a couple of times!

The Slow Fashion October theme for this week is “Long Worn,” with the idea being a celebration of garments long loved — hand-me-downs, thrift-store finds, pieces you’ve refashioned, etc. — and I really had planned to write about a couple of my oldies-but-goodies, but as I was writing this I realized that in some cases, long worn starts with the making. Barring some very unfortunate accident (looking at you, washing machine), we’ll be wearing these sweaters for decades. They are well made, using good quality wool, and they’re not really tied to any particular trend. They aren’t long worn yet, but they will be, and knowing that is part of what made the knitting so rewarding.

Is planning what to wear while you’re away, right? Well, in less than two months, L and I will be on our honeymoon in Iceland, so it seemed only sensible that we have lopapeysur to wear while we’re there.

I knit mine first, partly because I knew what I wanted, which made starting easy, but also because I have yet to knit L a sweater, and lopi isn’t exactly soft. It’s not unduly scratchy either, I don’t think, but it’s not merino, so I wanted to make sure he could get a real sense of the fabric before I knit him a sweater. (I see no sense in knitting him something he won’t wear, so this was a no-pressure, no-surprises knit. He chose the pattern and colours for his sweater, has been trying it on as I go — just sleeves so far — etc. Kicking off our marriage by knitting him a sweater he wouldn’t wear and that I’d be annoyed he didn’t wear seemed like a pretty bad idea.)

Anyway, this isn’t about L’s sweater (which I’ll write more about later), this is about mine, which is finished. Finishing a lopapeysa in mid-July is a bit strange, to be honest. This must be the first time I’ve finished a sweater and not been excited to put it on! I knit it through a wave of very hot and humid weather, and it took days to dry after blocking because their was so much moisture in the air. Needless to say, this was a quick little selfie photoshoot because, a) It was too hot for more than that, and b) There will be time during our trip to get proper photos of it in suitable weather.

I knit Stopover, by Mary-Jane Mucklestone, and it really is as quick as you’ve heard. My gauge was a bit tighter than intended because they don’t make 7.5mm needles (really!), and even that didn’t slow me down. Time from start to finish, without any rush: less than a month. At that speed, there may well be another in my future, especially since the lopi softened up quite nicely. I’m just wearing it with a t-shirt in these photos, which probably isn’t how I’ll wear it usually, but it wasn’t uncomfortable. I most concerned about the neck, where I can be a bit sensitive, but it was fine!

So, that’s one down, most of one to go, and a little more than six weeks. I don’t want to jinx myself, but I am feeling pretty good about those odds. (Just don’t remind me that I also have socks on the needles for L, the colour of which that he says would go really well with his suit. No pressure at all.)