It turns out awesome things can happen when you get up and out of the house early-ish on a Saturday morning. L and I live really close to one of (in my opinion) Toronto’s best neighbourhood farmer’s markets. Truly, Wychwood Barns is a credit to the city, and it’s one of our favourite things about where we live. We don’t always make it on a Saturday morning, but we try – it’s where we buy our coffee beans (we get the Wychwood Barns blend, of course), it’s where we buy a lot of our hearty produce, and now, it’s where I can buy wool. That’s right. Locally grown and milled wool, just steps from my house.

For most of the year the Stoddart Farm booth is only at the market on the last Saturday of the month, but in the run up to Christmas, Silvia (farmer extraordinaire) tells me she will be there every week, and I am pretty friggin’ excited about that. I mean, look at what I got!

Just the thing to relieve those February blues (or greys, whatever).

Silvia raises the sheep and the mohair goats herself, and then hand paints the wool using environmentally friendly dyes. The wool itself is milled just a few hours from the city, in Elora, making the whole enterprise super-local. I didn’t have my camera with me, but her market table is a riot of colour, with yarns in numerous weights and batts and roving too. That she is the sweetest person just tops it all off. Honestly, I can’t wait to go back next week and pick up a skein of fiery orange/red laceweight I saw.

That I got this alongside Fair Trade coffee and an awesome breakfast cinnamon bun probably means that this weekend is too good to be true and I’m now bound for disaster, but oh well, I’m thinking this yarn was worth it.

I’ve been back in Toronto for just over a week and I still haven’t managed to write about the last stop on my trip, Baku, capitol city of Azerbaijan. It also occurred to me that the Caucuses are not really an area ever covered in geography class, so if you’re curious about where I was, here’s a map: 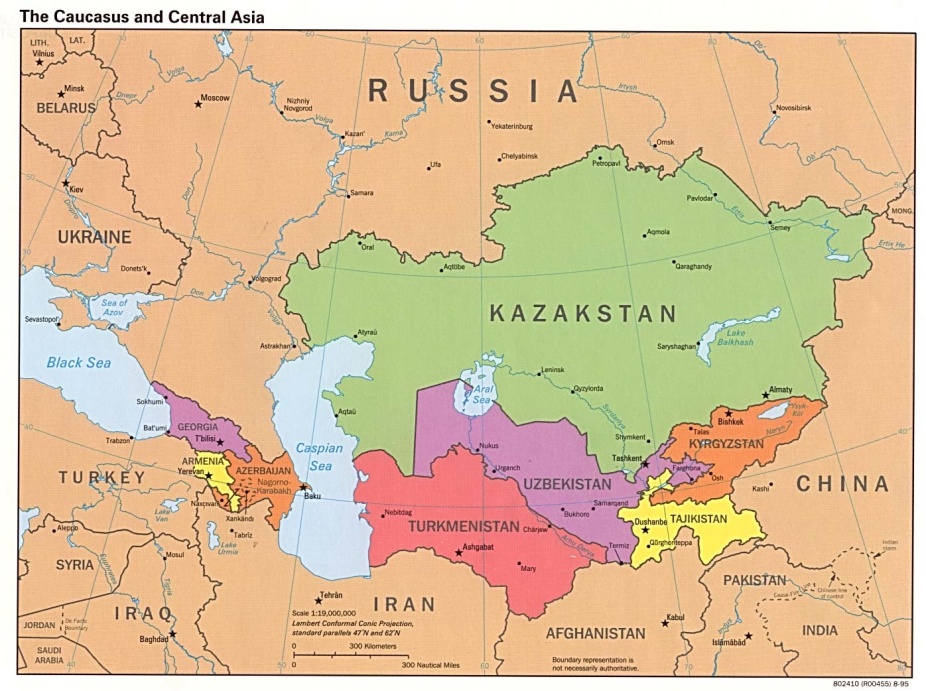 We were in the trio of little countries to the left. (Source: University of Texas Library)

Anyway, Azerbaijan was really the only country we visited in which we didn’t leave the main city. We did spend an evening in my dad’s colleague Rafig’s dacha, on the north coast of the Apsheron Peninsula, but we were driven to and from, and although it was a wonderful evening of traditional food and traditional dancing (!), it wasn’t really sightseeing. So, Baku, then. What an incredibly beautiful city. It is right on the edge of the Caspian Sea and has been laid out to take advantage of its seaside local. There is a gorgeous wide pedestrian boulevard along the water that runs for kilometres uninterrupted and is always full of families, young couples, and school kids strolling around, eating in the many cafés or simply enjoying the view from one of the many benches. It’s all landscaped and filled with beautiful gardens and fountains and really, you could believe yourself on the Riviera.

I loved these dandelion-esque fountains.

The other restored area we wandered through in Baku’s downtown was the vast network of pedestrian shopping streets. Really, Baku feels strangely Parisian (although much cleaner), and its old buildings have been brilliantly restored in this area. The crime rate there is almost zero (the benefit of a totalitarian government, I guess) and I think a lot of the happy and carefree attitudes exhibited in the streets is because of this. Families are out at all hours with young kids playing happily and running around, and there isn’t a threat to be seen. It’s kind of incredible.

These grape vines are planted at street level and then trained up the wall to shade the upper balconies. You see this everywhere and I think it’s genius!

Baku also has a beautiful and immaculate old city. Unlike in Yerevan, where that just doesn’t exist, or even in Tbilisi, where they are working very hard to restore the Old City, in Baku, the buildings there have been wonderfully preserved. Many of the cellars and main-floors are now used to shops where you can buy all manner of Azeri-made textiles, pottery, and antiques. And I’ll be honest, I shopped. I didn’t buy much in either Georgia or Armenia, but since Baku was the last stop, and has some truly beautiful work, I treated myself a bit. 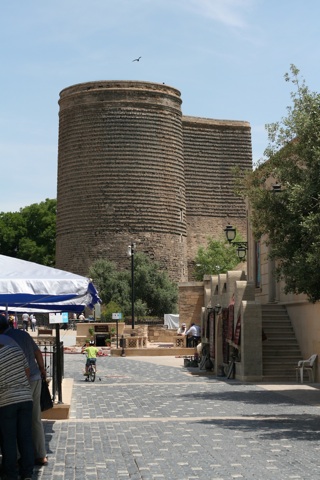 The Maiden Tower, which was built in the 12th century. From the top you get an amazing view of the city and sea, and the breeze is very much appreciated after climbing up the many, many airless steps.

This a tablecloth I bought, all beautifully woven out of camel wool and silk. The motif is called the flame, and it’s the national symbol of Azerbaijan – it’s on everything. 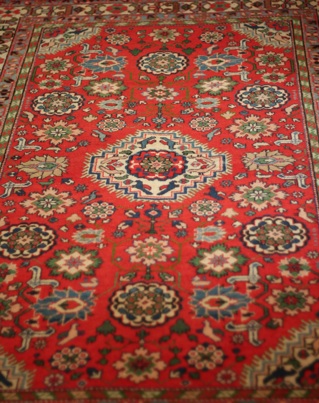 My parents bought this carpet. It’s 50 years old or so (meaning it was dyed with vegetable dyes, not acid-based ones) and made entirely of wool. We spent a whole morning carpet shopping, and it is quite the art.

Of course, we also ate and stuff. For the most part, Azeri cuisine is very similar to that of its neighbours. It was the hardest place for me to eat out in restaurants – for whatever reason, most of their dishes have meat in them and, since English is more limited here than elsewhere, it’s difficult to have any modifications made to the dishes. That being said, I did alright. Their bread is delicious and comes with every meal, and once I learned a few particular dishes (thanks largely to the meal we enjoyed with Rafig and his family), I was fine. The real treat, though, was the tea.

In Azerbaijan, they drink Azer Chay (literally Azeri Tea, but pronounced Azer Chai), and instead of serving it with milk and/or sugar, it comes with slices of lemon and a bowl of jam. Thus, when your tea has been poured, you had a slice of lemon and a spoonful or two of jam, which sweetens the tea. Their jam, though, isn’t like Smuckers or some other North American brand; it’s really more like a preserve, and the fruit is generally whole or in quarters, suspended in a thick, syrupy, liquid. It is delicious and very indulgent and I loved it.

I loved it so much I bought a box of tea and two jars of homemade jam to bring back with me. The jam that I bought came from the market, which is an entirely local affair situated in the opposite direction of anything that you could consider remotely touristy. My mum and I went up there to buy some food for dinner (my dad’s work is based out of Baku, so he has an apartment there). You can buy everything there. Just everything. Besides the jam, we also bought fruit leather (hugely popular in the region), fruit and veg, and two kinds of cheese. We could have kept right on shopping, but our bags were quite heavy. 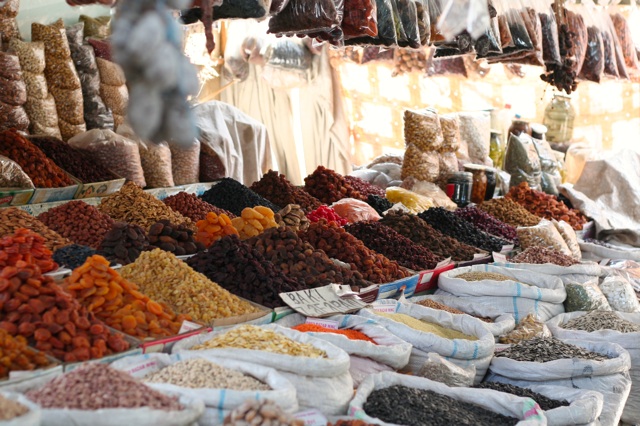 There is a whole section of the market dedicated to dried fruits and spices.

Jars and jars and jars of preserves. These are much, much larger than the jars of homemade jam I bought.

In all, we had three and a half days in Baku before getting on the plane and heading home (for me, that was 26 hours door-to-door). It was an amazing way to end a two-week holiday, and you can bet I’ll go back if I have the chance.