These socks knit up so fast that I didn’t even have time to blog about them. I bought the yarn a couple of weeks ago after reshelving skein upon skein of this yarn in the shop. I thought I could resist – goodness knows, I didn’t need more yarn – but after squishing so many skeins, and seeing all the colours, my resolve wore down. I actually thought the yarn was just going to be a variegated blue/green/grey, but after winding it an seeing the colours line up neatly into concentric circles, I got too excited about the striping possibilities not to cast on pretty much right away.

Zitron Unisono sport weight in colourway 1220. Weirdly, those parts that photographed as purple were definitely not purple when knit up. It’s kind of a shame, really.

Well, it sure striped. The funny thing is, they striped in almost exactly the opposite order. I spent most of the first sock wondering when the heck I was going to get to the fun bright colours, which mostly ended up on the foot, and then the second sock started out fun and got progressively darker. But! The very end of the skein was bright colours again, so even if I had knit the first sock from the inside of the skein out, and the second from the outside in, they still wouldn’t have matched! 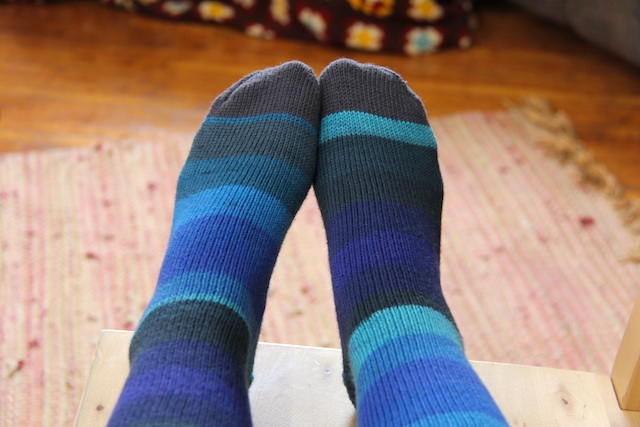 L was away this weekend, so these will have to do. You can kind of see the opposite-ness, though.

I think it’s okay, though, since they’re clearly a pair. Part of that comes from the surprise toes, which I realized I was going to need when I weighed the ball part-way through the first foot and saw I was dangerously close to half my yardage already. By that point, I was already entirely smitten with this yarn, so I had (against my better judgement) purchased two more solid skeins for another pair of (more regularly) striped socks. I knit the first sock until I had about 53 grams of the yarn left, and then switched to the dark grey. I wrote down the measurement of the foot at that point and then copied it for the second sock (even though, at that point, I had just enough yarn to finish the whole sock). There’s something about matching toes that makes these look more like a pair, I think. (Details about what I did, etc. are ravelled here.)

The pair took less than two weeks to knit, and I swear they pretty much knit themselves. The yarn, Zitron Unisono, is 100% merino and infused with aloe and jojoba and feels amazing on your hands. It is so tightly twisted that it’s downright sproingy, and it knits up into a firm but soft fabric that is warm and stretchy. For speedy socks, this might be my new go-to yarn (as long as I have some extra for the toes) and although I have to be good and knit some other things beforehand, I am pretty excited to cast on my next pair.

With these socks finished, as well as a hat done and blocking, my weekend was pretty productive. How was yours? Any signs of spring where you are? (It remains cold here, so I could use some vicarious spring if you’ve got it.) 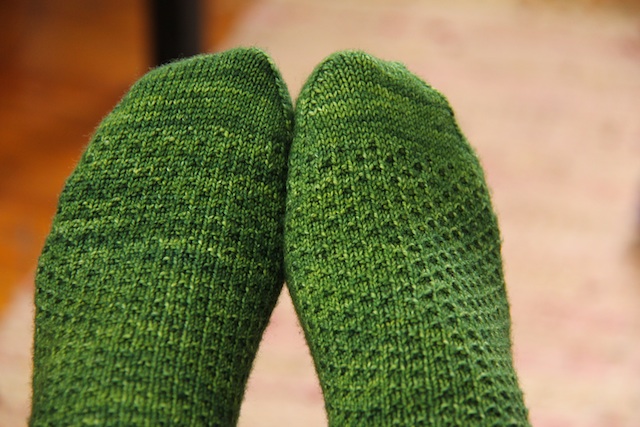 One of the reasons being a knitter is so awesome is because it offers the opportunity for fairly frequent joy. Oh yes, there’s usually an equal measure of frustration, but it’s those little joys that stand out. Today, that joy is putting on the brand new socks I finished yesterday. (Also, that joy is getting to cast on for another pair, which I obviously did, but that’s for another post.) 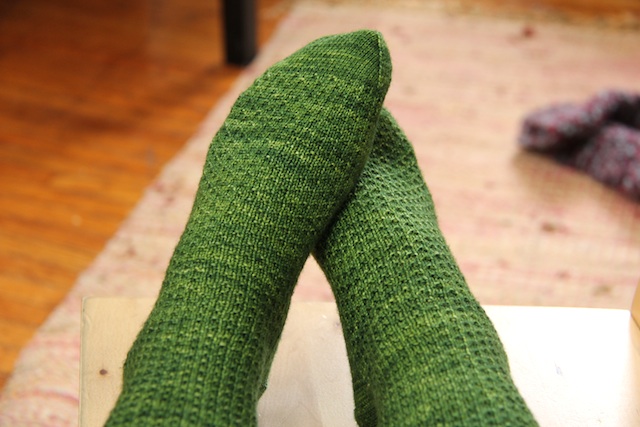 These are pretty simple socks, and I will knit them again because they’re just a little bit more interesting to knit than plain stockinette without really requiring much more focus. I knit these in the car, on the subway, and during many episodes of The Wire. Basically, they were just what I wanted them to be, and even though I was starting to dream of other socks by the end there, this pretty flickering green kept my attention from wandering too much. And, speaking of the colour, this is a great one for winter knitting. It has been pretty wintry in Toronto in the past few weeks, and getting to look at this bright colour on a regular basis was very nice indeed.

Details
Pattern: Hermione’s Everyday Socks by Erica Lueder (it’s a free one)
Yarn: Tosh Sock in Jade
Needles: 2.25mm
Modifications: Very few (and detailed here). I opted to do my normal slip-stitch heel instead of the garter-stitch edged one in the pattern. I also opted to do twisted ribbing at the top, which looks nice and is very elastic, but also annoyingly time consuming (I swear the ribbing took me almost as long as the entire leg.)

Now, I know the responsible thing to do would be to go finish the second sock from this pair, and I really was going to do that, but then this other yarn caught my eye and before I knew what was happening I was finished the ribbing and into the leg on new socks. I couldn’t help it. I mean, look at this yarn! Sigh.

Zitron Unisono sport weight in colourway 1220. This yarn is so springy and soft it is not to be believed. Also, it has aloe and jojoba in it. And it’s going to stripe. How was I supposed to resist that?