I know the key word there should be “progress,” but mostly it just feels like “slow.” Anyway. Remember all that time ago when I said I was casting on for a sweater? Well, I actually did that. And then I got distracted by socks and life and it languished. It’s my in-the-background project, so I was alright with it not being a priority.

Last week, though, I decided I should dedicate some actual time to it, otherwise it was just going to be a background project forever, and nothing is less motivating than returning to a project that seems to be going nowhere. So, Tuesdays and Thursdays are now for sweater -knitting only (well, and work and cooking and all that other stuff; it’s more like any knitting that gets done on those days must be for the sweater). It’s been two weeks, and this is what I have to show for myself:

April 10, barely beyond the ribbing and before my dedicated sweater knitting plan. 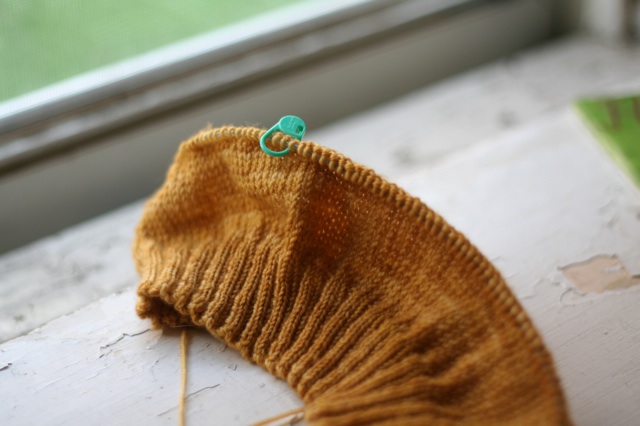 This is Buckwheat by Veera Valimaki and I am being unoriginal and knitting in the same colourway she did, which is Malabrigo Sock ochre (had I seen Boticelli Red at the time, things might have been different). To get gauge I had to go up to a 4.5 mm needle, which means the wool and needle pairing are not exactly natural (tiny wool, biggish needle), so I feel the need to hold everything more tightly than normal, which is slowing me down.

I’m not quite at the waist shaping, which means I’m just far enough along to start worrying that it won’t fit. I have no reason to think this except that I tend to think this about everything  knit right around the point that I’m far enough into it that ripping back seems unfathomable.  Thus, I will not be ripping this and will instead persevere with the assumption that I’m being crazy and everything will work out.