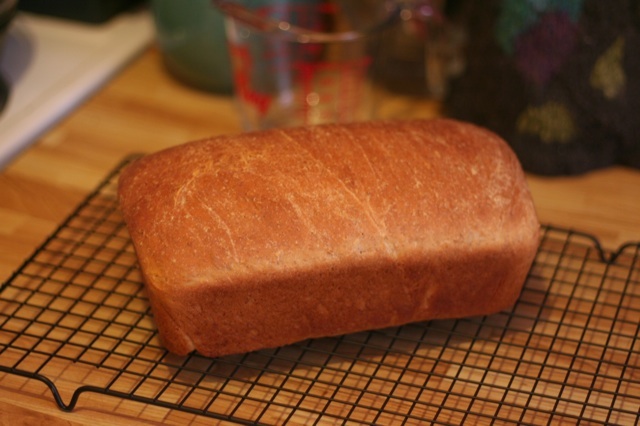 Remember how I said I was going to start making bread on the regular? Well, so far so good. I would guess that I make about 60% of our bread (this is an average because L eats way more bread than I do and buys bread to keep at the lab; I eat almost entirely homemade bread, unless I’m feeling lazy and then I just go to the bakery), which is not too bad.

Mostly I’ve been making the overnight, no-knead French loaf, which is a really easy staple as long as I’m on the ball enough to plan ahead.

I tried something a little different the last time I made this and substituted a half cup of flour for a half cup of flax meal. It added a really nice nutty sort of flavour and still rose beautifully.

But, because there are mornings when I get up to discover all the bread has disappeared overnight (or something), and I need bread for something before tomorrow, I’ve started trying some other recipes (as I said I would). I bought a very nice bread pan (tin?), and the first right-now loaf I made was Honey Wheat Bread, which is an easy and delicious loaf for sandwiches and whatever else you might use bread for.

Not bad for a first attempt, I thought. And not too sweet, either.

I followed all the other directions as-written, except, obviously, dividing the dough into two equal portions. The results were awesome, but I will have to work on my rolling technique in the future, as I ended up with a large air pocket just under the upper crust. Otherwise, though, I cannot recommend this recipe highly enough. Next up, I think, will be this Light Wheat Bread, which takes a little longer, so it will have to be made on a day when I’m kicking around the house.

After that, I’m not sure. What are your bread standbys? Any chance you have a great raisin bread recipe you wouldn’t mind sharing?