So, remember when I was all “cautiously optimistic” about finishing Buckwheat before the end of the Euro? Yeah. Yesterday I tried it on and it turns out that that nagging little voice that had been telling me it was going to be way too short, well, that voice was right. Way right. I was just about to start the short-rows on the front/back and thought to myself, hey, maybe I’ll just pull this on and see how it’s going. As it turns out, if my armpits were where my bra band is, everything would be fine, but they aren’t, so it’s tricky.

For about three seconds I contemplated just finishing and then trying to block it out, but honestly, that would be dumb. I want to wear this sweater. I love the colour, I’m liking the fabric this knit is creating, and I will be really ticked if, at the end, I can’t wear it. 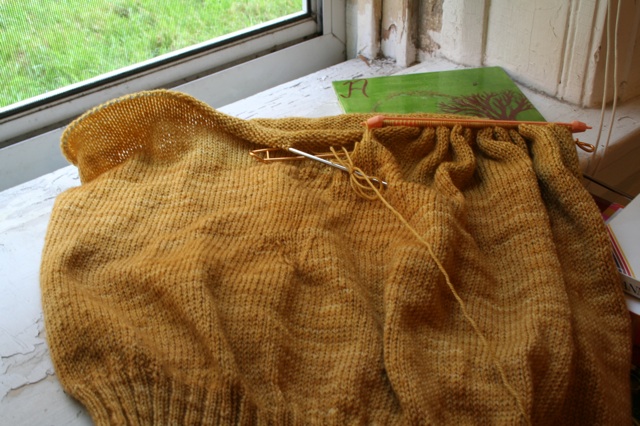 …and, not I’m back down here again.

So, yesterday, right before leaving for work, I tore it back to where I divided for front and back. Now I have to pick up all the stitches from my holders and figure out what I’m going to do. I think the problem is less with Veera’s pattern and more that it seems very few designers know what to do about breasts. I am chesty. It’s true. I had to measure myself for a bridesmaid dress this week and discovered that there’s actually an easy 8-inch difference between my bust and waist measurements, which is fine, and I’m sure not crazy unusual. The thing is, though, that generally when things get larger they get wider, but not longer. That means the extra surface area of my chest is not really being taken into account; yes, bigger breasts mean more width, but they generally also mean that, when you’re talking about a garment that isn’t meant to fit as a tent, there needs to be more length allowed.

As far as Buckwheat is concerned, there is a little more length allowed for the bottom, which is good, but for me there also needs to be more length in the chest. As it stands, the pattern says to knit 3 inches past the top of the waist shaping, then divide for front and back. In my case, I’m going to need about 7 inches past the waist shaping. I’m also debating adding some stitches to the front of the sweater, just so it doesn’t pull over my chest (not that it would be too tight, but I’d like the texture to remain the same throughout).

Anyway, I will let you know how it goes… In the meantime, have any advice? Have any of you run into similar, er, busty problem with sweaters? How did you fix them?

Edited to add: I tried it on again after taking the stitches off the stitch holder and have decided I definitely do not need any more. In fact, despite the fact that I’m knitting at a slightly tighter gauge than indicated, it might be a sort of loose, comfy, drapey sweater. Thus, just more length, not more width, do deal with the bust issues.

One thought on “And then I ripped”