So, here I was, all prepared to do my Burrard progress post and report that I was almost through the waist decreases on the back with nary a problem and then I looked at the photos, and yeah, miscrossed cable. One full repeat back.

Can you spot it? Let me give you a hint: 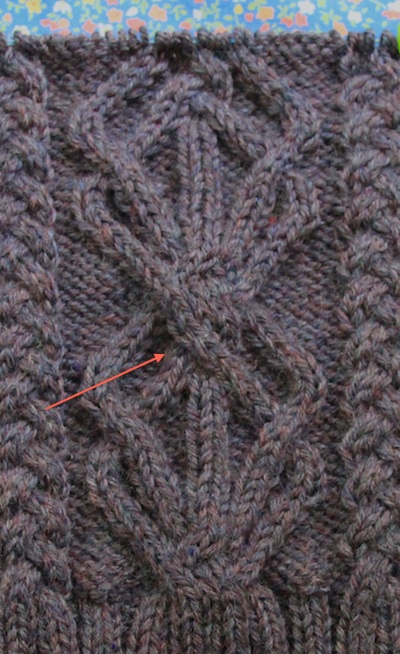 Sigh. The only reason I even noticed it is because I was going to say how it’s a shame that this dark yarn hides the details in the knotted parts of the cables, and so then I looked at them more closely, and yeah. I almost made the same mistake in the row I just knit (which is hard to see, but is right under the cord at the top). Maybe if I had repeated the mistake then it wouldn’t be so noticeable? Because it would be continuous? I don’t know. That mistake is about 26 rows back, which is several thousand stitches, and I’m not sure I have it in me to rip that. If I really hate it later, I can always duplicate stitch, right?

(I can’t decide whether I want you to encourage me to be a perfectionist and rip, or tell me it’s okay and let me carry on.)

Anyway, before I noticed that, I was also going to say how I had to rip back all the ribbing after I started the cables and realized I was three stitches off in the ribbing (despite checking the errata) because I apparently can’t count. Ribbing isn’t such a big thing to rip out, though. I actually ought to be somewhat farther along, but this has been kind of a long week work-wise, and by the time I got home (often at least an hour later than usual) all I could handle was plain stockinette, so I turned to these, which were cast on months and months ago at another time when all my brain could handle was plain stockinette. The splash of colour was a welcome distractions as well, and I figure that if I knit a few rows a week, I’ll get both some colour therapy and that much closer to a finished pair (the first one is done), so it’s win-win.

Maybe I’ll pick them up now while I debate what to do about this cable situation.