A little while ago, I read Nancy Bush’s Folk Knitting in Estonia (yes, read; there’s a lot of front matter on customs and traditions  before you even get to the patterns) and I was amazed by the role mittens played in Estonian traditions, especially marriage. For example: by the time they were brides, women were expected to have at least 50 pairs of mittens in their dowry chest. And not just regular mittens, either, fancy mittens they could present as gifts to their wedding party and their groom and his family and the guests. Mittens were also traditional gifts for an Estonian bride because, as Nancy Bush says, in Estonia people would often go through three or more pairs of mittens a winter.

I read all this after having knit a pair of mittens as a wedding gift for my friend Carmen last year. They were the fanciest mittens I’d ever knit and, for reasons I couldn’t quite express at the time, seemed like a perfect wedding gift for an October bride.

This October, my good friend Jacq is getting married. I knew I wanted to knit her a wedding gift, and after reading Nancy Bush’s book, I knew that mittens would be perfect.  She is someone with a deep appreciation for tradition, especially where women’s work and wisdom are concerned, and I knew she would appreciate not only that the mittens were hand knit, but also that they relate back to marriage tradition – albeit, one from a country and culture that neither of us are related to.

The trouble was, of course, what mittens to knit? There are a lot of patterns out there and I wanted them to be pretty but also suitable for everyday wear. Jacq often walks to work, so they needed to be warm (Toronto winters can get cold), but not so thick that she couldn’t easily hold a coffee cup or use her phone while wearing them.

I looked at a lot of patterns before remembering how much I liked Rachel Coopey’s Chamomile mittens and hat set from last winter’s Twist Collective. I knit them up in Classic Elite Fresco, which is a blend of wool, alpaca, and angora, making it lightweight and super warm and perfect for stranded colour work. The pattern also suggests traditional lace edgings to me and, although I have not yet seen the wedding dress, I just know it’s going to feature lace detailing. 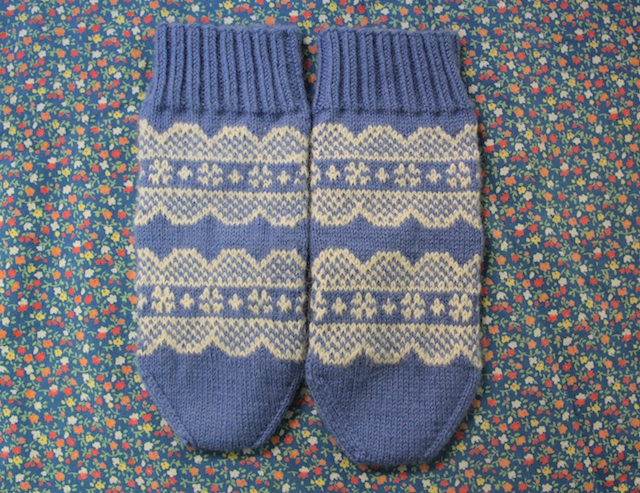 Jacq’s bridal shower was yesterday; she didn’t open any gifts during the shower, but she e-mailed me this morning to say she opened the mittens last night, and, in her words, “they’re perfect for me.” Her wedding is in October, and while I hope it isn’t yet cold enough for her to need the mittens, I hope they keep her hands warm and cozy through the first few winters of her marriage, and, when they wear out, I will happily replace them.

Details
Pattern: Chamomile by Rachel Coopey
Yarn: Classic Elite Fresco in Cornflower and Parchment
Needles: 2.5 mm
Mods: I knit the pattern almost entirely as written. My only real change was to rechart the middle row of the colour work (between the “lace” borders). As written, the charts would make mittens to fit my hands perfectly, but I am probably 7 inches taller than she is, and her hands are thus proportionally smaller than mine. I took nine rows (!) out of each colour work repeat, which shortened the whole mitten by about two inches and the finger area specifically by about an inch, which was perfect. It took me a few tries to figure out a mod that I liked, but after that, the knitting flew. Ravelled here.