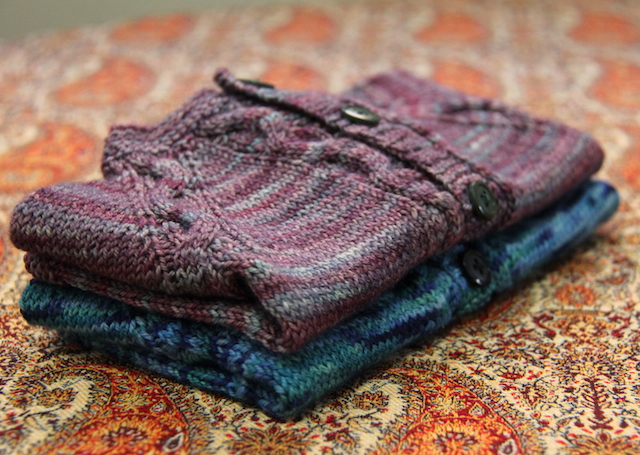 Last week, my childhood friend Morgan had twins. Twin boys. Obviously, we knew she was expecting twins, so back in the fall I decided to knit little sweaters for her babies, then sex-unknown. It’s a joint gift from my mum and I, since our parents are friends: my mum bought the yarn and I did the knitting, which is a pretty good deal, really.

Besides the yarn choice, I had to choose a pattern. I wanted to do something complementary, but not completely the same, so either the same pattern twice in different colours, or the same colour twice in different patterns. My mum and I both preferred the first option, and after that it was a pretty easy choice to go with Sunnyside by Tanis Lavallee. 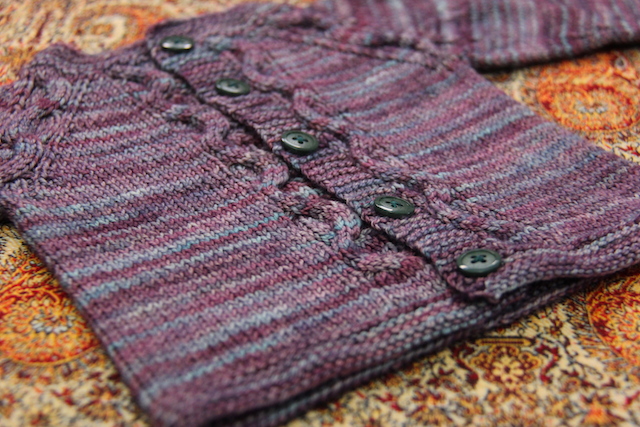 I picked out the yarn before Christmas. I will admit that I thought she’d have a boy and a girl, so I picked unisex colours that played into that a little. I cast on the first little sweater after finishing my holiday socks, and it was my first finished knit of 2014. Then I got distracted and knit other things before casting on the second sweater. I wasn’t even through the raglan increases when Morgan had the babies, but that’s okay. Twins are little (just over 5 lbs each!) so it takes them a bit to fit into full-sized baby clothes.

I knit the smallest size almost exactly as written, but I mashed up the two options a little. I really liked the back and forth of the lace pattern, but for a more unisex look thought cables would be better (not that babies care). So, I just did back and forth cables. I was initially going to mirror the cables on each sweater, but then I thought it was more fun to mirror one sweater to the other.

I’m really happy with the results, which will go in the mail later today/tomorrow. The yarn (Malabrigo sock for both) is so soft and snuggly and I really like the colours, even if the blue does kind of obscure the cables a little. After knitting this little sweater twice, I can definitely see myself going back to it. I’d like to knit it as written, and maybe also with braided cables, and I do like the lace option. So fun. 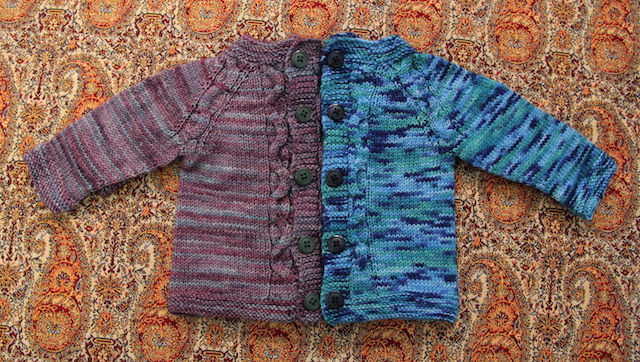 Details
Pattern: Sunnyside by Tanis Lavallee
Yarn: Malabrigo Sock in Lotus (pink/green) and Caribeno
Needles: 3.75mm
Notes: Pretty much knit exactly as written. I started the buttonholes later (on the ninth rather than the fifth row) and then carried on every 20th row as written, which ended up working out perfectly at the bottom spacing-wise. I also did back-and-forth cables instead of the rope cables in the chart. So: on sweater one I alternated cable right and cable left, and the second sweater I alternated cable left and cable right, which gave me zig-zag cables that mirrored each other. I also did five rows of garter stitch at the cuffs and the bottom hem, to match the neck. They’re ravelled here and here.