Remember that list of WIPs I posted about a while ago? Well I guess pulling everything out lit a fire under me or something because here I am with a third item off the needles!* These are just plain socks, knit up in Hedgehog Fibres Twist Sock (a BFL/nylon blend) in the Pheasant colourway.

I finished them last week, but they had been on the needles for a while. I cast them on after finishing my Christmas socks and they’ve been background knitting ever since. Mostly that has meant a row here and a row there, but no concentrated attention. I have a vague memory of spending an afternoon finishing the foot of the first sock so I would be able to cast on the second one before I had to go somewhere (plain stockinette socks are great social knitting as long as you aren’t just about at the heel or just about at the toe), but somehow these never pushed their way to the top of the pile. 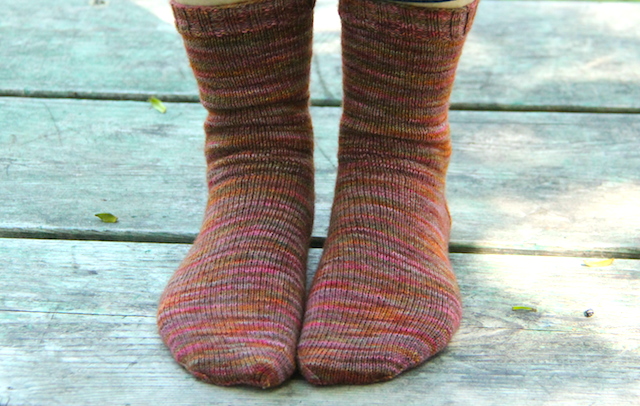 After I finished Grace, though, I decided to just finish these already! I’ll admit that I was tempted to leave them on the side and pick up the Daphne socks that have been languishing (another item from my WIP list, which made it easy to justify), but I knew that if I left these any longer they wouldn’t get finished before the fall. And I’m so glad they’re done! This colourway is so lovely, and I even wore them earlier this week on a sort of chilly day.

Next up? I’m now half-way through the second Daphne sock without even trying, so you can bet you’ll be seeing more finished socks very soon.

*Items one and two, in case you you’re wondering.