(Note: This is a little out of order, because I’d really planned to follow up my last post with one about my goals for 2016. But, since one of those goals is not to waste momentum, I’m going to get this up now, and then circle back around.)

When I was growing up, the vast majority of the Christmas gifts under the tree weren’t “wrapped” in the traditional sense. Yes, when all was said and done, we had plenty of wrapping paper to put in the recycling bin at the end of Christmas day, but for the most part, the gifts from my parents were wrapped in fabric bags my mum had made and reused every year. I don’t know when she first started using them, but I can’t remember a Christmas without them, so I must have been very young.

The concept is pretty simple, really. They’re just basic drawstring bags — unlined, no fancy seam finishing — in a variety of sizes and Christmasy prints. Every once in a while new ones would appear, but mostly it was the same ones, year after year, and they say Christmas to me as much as any ornament on the tree or special meal. Every year, after everything is unwrapped, my mum collects all the bags, folds them up, and puts them away for the next year. No one gets to keep them, and there’s no counting at the end of the day. A few years ago, though, my mum made new ones for my middle sister and I, and they were part of our Christmas gift that year: the beginning of our very own set, for the families were starting. 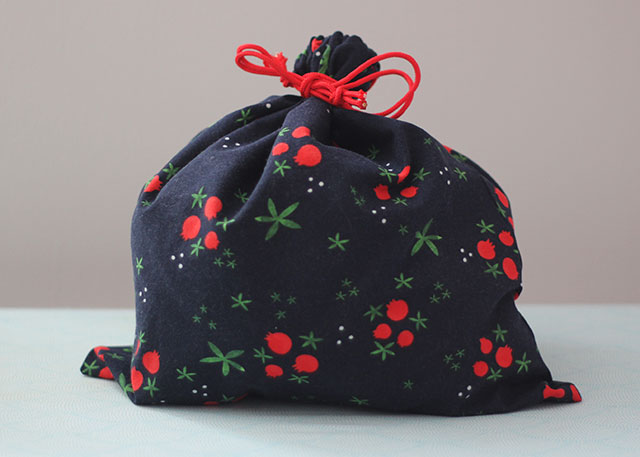 Every year, I use those bags she made me to wrap my gifts for my family — L and I use them for each other, and I use them for my sisters and parents — and there is perhaps nothing more fitting than placing a hand-knit item or specially-chosen present into a handmade bag. Even people who have never had a gift wrapped that way before love it. L’s dad came to spend the holidays with us this year and loved his Christmas bag so much I felt a little bad asking for it back.

All of which brings me to the point of this post: Back in October, when L and I were in Toronto for a wedding, I went to the shop to buy some fabric for my own set of gift bags. In the summer, Cotton + Steel released a Christmas-themed fabric collection (Tinsel, it’s awesome) and I took that as my cue. I bought fabric in three prints so I could start building a collection of bags of my own — ones that could maybe be part of the gift in some special cases.

I then waited for a free weekend afternoon to materialize so I could set about bag making. 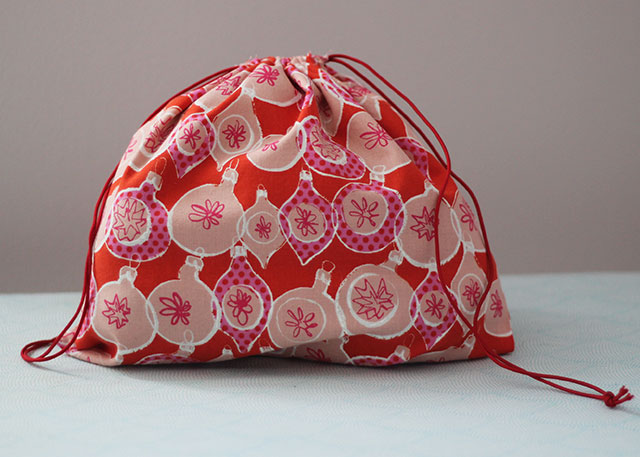 But, of course, free afternoons don’t really offer themselves up. Especially when you’re in the thick of Christmas knitting and exploring a new city and seem to be working all the time. Christmas arrived and my fabric was still sitting in the closet (not a disaster, since I had lots of other bags to use) and it wasn’t until Boxing Day that I finally had a day with nothing planned that had to be done. I cut all the bags and sewed up half of them, and you know, I felt pretty good about it. 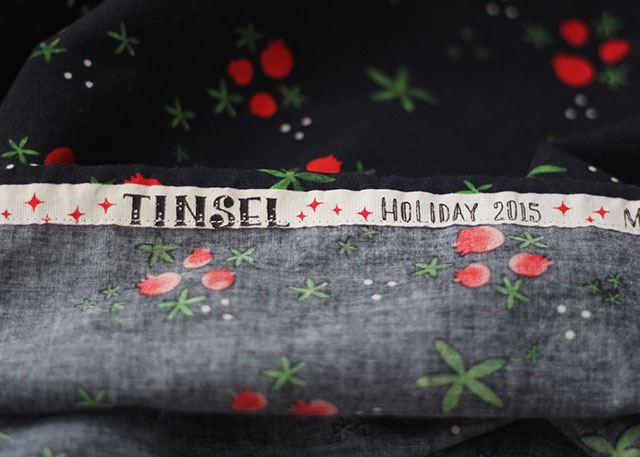 Today, we’re going to undecorated the tree and put all our Christmas things away for another year. I was thinking that I could just put away the cut-out bags as they are (I finished the bulk of them, after all), but then I thought about how busy the holidays were this year, and I realized that it’s not going to be any different next year. If anything, it’s going to be busier. So I decided to just take an hour (that’s all it’s going to take, if I’m honest with myself) and sew them all up. My future self will be so happy they’re done and ready to go next Christmas. Thirteen bags, ready to be filled — it’s practically an early gift for myself!

16 thoughts on “My future self will thank me”